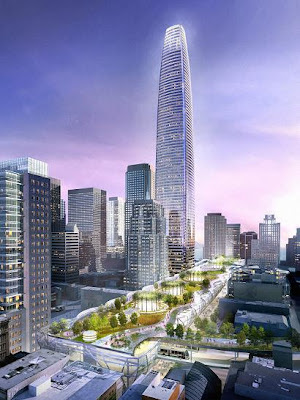 Richard Lacayo at Time Magazine pronounced the Cesar Pelli proposal for San Francisco's Transbay Center to be the "Most Promising Development":

Most promising development? I was glad when Cesar Pelli's proposal won the competition for the new Transbay Transit Center in San Francisco. What's most interesting about Pelli's scheme is not so much the tower — which is a variation on a fairly elegant template he's already provided for towers in Hong Kong and Jersey City — but the 5.4 acre park that the design provides on the six block-long roof of the transit center, which is a hub for bus and rail lines. If all goes as planned it'll be a green roof that's also a true public amenity.

Full story here. Image of artist's rendering from the Time website.
Posted by Anna L. Conti at 11:39 AM

The park is a good idea, as long as it's well maintained. But we know how difficult that is in downtown SF. The 50+ story tower in an earthquake zone. Good idea - uh, maybe not. The pretty picture which, in reality, translates to another huge tower blocking views, overshadowing huge areas of the city and creating a wind tunnel that will rival Hurricane Katrina.