Hans Hofmann’s famous phrase “push and pull” is most often associated with his signature works of the 1950s and 1960s, in which bold color planes emerge from and recede into energetic surfaces of intersecting and overlapping shapes. The ideas and impulses behind this enduring term, however, took shape decades earlier, in his teachings, writings, and in his own paintings. In the late 1930s, in a series of widely attended lectures in Greenwich Village, Hofmann demonstrated how to “push a plane in the surface or to pull it from the surface” to create pictorial space. “We must create pictorial space,” he declared to audiences of avid young artists and critics, including Arshile Gorky, Clement Greenberg, and Harold Rosenberg. Hofmann would later refine his definition of push and pull as “expanding and contracting forces . . . . the picture plane reacts automatically in the opposite direction to the stimulus received; thus action continues as long as it receives stimulus in the creative process. Push answers with pull and pull with push.”
"Pulsating, luminous, and open surfaces that emanate a mystic light."
Push and Pull: Hans Hofmann brings together signature paintings from BAMPFA’s distinguished collection of the artist’s work, such as Combinable Wall, I and II (1961) and Magnum Opus (1962). In 1963, at the height of his internationally acclaimed career, the artist donated nearly fifty paintings to UC Berkeley in recognition of the University’s important role in his early career. He first came to America from Germany in 1930 to teach in UC Berkeley’s Department of Art, at the invitation of Worth Ryder. From Berkeley, Hofmann went on to New York, where his established his famed and influential art schools. By the late 1940s Hofmann was  also recognized as a progressive, avant-garde painter and one of the originators of Abstract Expressionism. In 1958, at the age of seventy-eight, Hofmann closed his schools and returned to his studio full-time, for the first time in over forty years. In this last decade of his life, he produced an astounding body of energetic, masterful paintings. “My aim,” he stated in 1962, “is to create pulsating, luminous, and open surfaces that emanate a mystic light, in accordance with my deepest insight into the experience of life and nature. 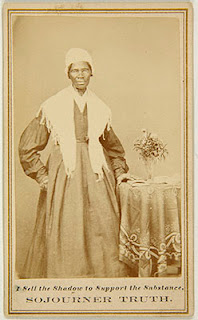 The University of California, Berkeley Art Museum and Pacific Film Archive presents Sojourner Truth, Photography, and the Fight Against Slavery, on view July 27 through October 23, 2016. The exhibition features a large selection of photographic cartes de visite of the famed former slave, as well as other Civil War–era photographs and Federal currency, none of which have been exhibited before.

The exhibition is organized by Darcy Grimaldo Grigsby, Richard and Rhoda Goldman Distinguished Professor in the Arts and Humanities at UC Berkeley and author of "Enduring Truths. Sojourner’s Shadows and Substance" (University of Chicago Press, 2015), the first book to explore how Truth used her image, the press, the postal service, and copyright laws to support her activism and herself. Many of the photographs included in the exhibition were a recent gift from Professor Grigsby to BAMPFA.

Runaway slave Sojourner Truth gained renown in the nineteenth century as an abolitionist, feminist, and orator. This exhibition showcases the photographic carte de visite portraits of Truth that she sold at lectures and by mail as a way of making a living. First invented by French photographer André-Adolphe-Eugène Disdéri in 1854, cartes de visite are similar in size to the calling cards that preceded them, approximately two-and one-half by four inches, and consist of albumen photographs made from glass negatives glued onto cardboard mounts. By the end of the 1850s, the craze for the relatively inexpensive cartes de visite had reached the United States. Americans who could never have afforded a portrait could now have their likeness memorialized. Combined with the emergence of the new US postal system, these cards appealed to a vast nation of dispersed peoples.

Truth could not read or write, but she had her statements repeatedly published in the press, enthusiastically embraced new technologies such as photography, and went to court three times to claim her legal rights. Uniquely among portrait sitters, she had her photographic cartes de visite copyrighted in her own name and added the caption “I Sell the Shadow to Support the Substance. Sojourner Truth,” foregrounding her self-selected proper name, her agency, and her possession of self.

This exhibition places Truth’s cartes de visite in context by reconstructing the flood of paper—federal banknotes, photographs, letters, autographs, stamps, prints, and newspapers—that created political communities across the immense distances of the nation during the Civil War. Like the federal government that resorted to the printing of paper currency to finance the war against slavery, Truth was improvising new ways of turning paper into value in order to finance her activism as an abolitionist and advocate of women’s rights.

Visiting the Tenderloin Museum on a recent Friday, it was necessary to wade through and around plenty of street people, as well as “an unspecified number (of people) serving the multi-variate interests of an advanced society in what is collectively called vice.”¹
Along the way, a police officer and three community outreach counselors were engaged in friendly conversation with sidewalk and doorway sitters, trying to find out their issues and needs, and offering to take them to services, or encouraging them to return to the services they have been receiving.


Though small, the museum itself is new, well organized and thorough.  Photographs and text explain how the Tenderloin was rebuilt after the 1906 earthquake to include large apartment buildings and single room occupancy hotels, housing many office and government workers.   With so many kitchenless apartments, restaurants, bars, jazz and nightclubs, and large dance halls thrived in the area.