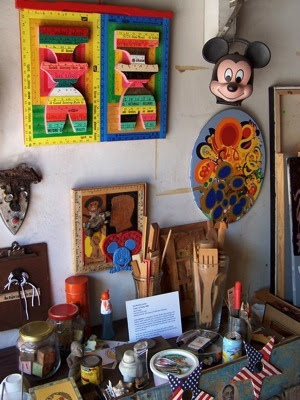 Lerma's paintings and collages, now on view at ArtZone 461, contain all the various threads of 60 years of art making in the Bay Area, including Abstract Expressionism, Funk Pop, and Conceptualism. The show is a slice of art history but it is also a tribute to the son of migrant workers who managed to live the life of an artist without compromising his integrity.

Born in Hollister in 1930, Lerma was a long time Californian, a Chicano and the first in his family to attend college.

His 4th grade teacher was the first to recognize his talent and from then on, he painted constantly, copying Renaissance art from 10-cent books. Later, in 1949, another teacher helped him to get a scholarship to the California School of Fine Arts  (now SFAI). 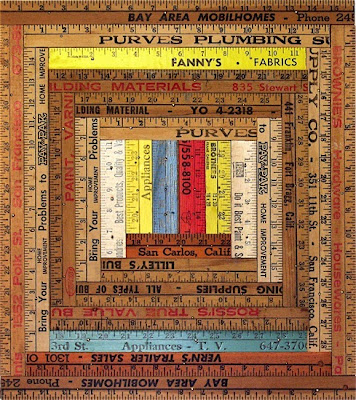 The Korean War interrupted his schooling but when he returned to San Francisco, he continued his studies, studying under such Bay Area notables as Hassel Smith, Edward Corbett and James Budd Dixon. 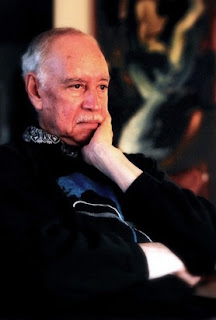 The artist commented on his early years at the school as having, “…the most impact on my life and art.  The art world of the fifties was free of the market and its temptations.  There was a certain purity about it.”

He showed at the small galleries that came and went in the San Francisco of the 50’s – Sparas, the “Six” and even Ubu. He was part of a scene that included Alan Ginsberg's 1955's public reading of "Howl.' Lerma was part of the culture which valued making art over making a career as an artist.

“We were rebelling against some of the things that were going on in the city, “Lerma explains. “We wanted to be ourselves, to express things that were unique about the West Coast. We were not interested in following what was happening back East…It was a very spirited thing without much money... We were all outsider’s and we knew it, but we still wanted to show everybody what we were doing.”

Lerma lived the life of a Bohemian artist, painting as much as he could and not that interested in a career. At various times, he worked as a live-in baby sitter and later worked at Macy’s.  There he collected what would have been swept out the door – paper, fabric, and iconic images.

In the 70’s, he developed an allergy to oil paints and began making collages, constructions and the occasional installation. Some of the more interesting pieces in the show are his construction/collages, made from bits of yardstick and other building material from long lost SF landmark businesses such as Goodman Lumber.

Lerma experimented fearlessly across genres and avoided categorization.  The retrospective shows a representative example of his work but the show is confusing because the works are not all hung chronologically. The strongest visual piece in the show is a figure drawing in black and white while his collages and assemblages reveal a quirky, questioning look at American icons such as Mickey Mouse and art goddess Frieda Kahlo. The abstract pieces are less successful, showing but not integrating influences as widely diverse as Jackson Pollock’s drip pieces and the stylized Zen landscapes of Mt. Tam. According to gallery owner, Steve Lopez, their matt surface is due to the use of inexpensive oil paint, a frugal choice made necessary by Lerma's finances. 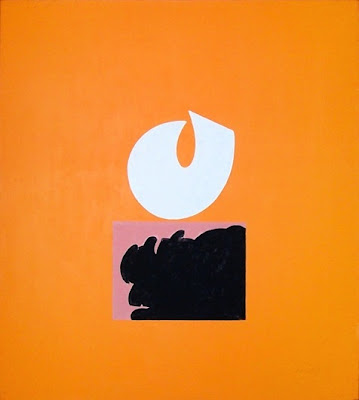 Lerma’s fierce independence and refusal to play the art game have impacted his visibility. He lived his life as a seeker after his own truth, not looking for financial security or career success. He lived without compromising his principles and has never regretted it. For that reason alone, his art is worth recognizing and respecting. If Diaogenes were alive today and looking for an honest man, he would recognize a kindred spirit in José Ramón Lerma. (all images courtesy of the gallery).

http://www.examiner.com/list/jos-ram-n-lerma-at-artzone-461-a-60-year-retrospective
Posted by Nancy Ewart at 3:07 PM No comments:

Belgian artist Isabelle de Borchgrave, whose "Pulp Fashion" exhibition of historical gowns made of paper was the Fine Arts Museums most-attended show in 2011 is back in San Francisco with a smaller show of Fortuny pleated dresses, textile-like paintings and new bronze clothing sculptures at the Serge Sorokko Gallery.

Isabelle de Borchgrave began her studies at the age of 14 at the Centre des Arts Décoratifs in Brussels.  She went on to establish her own studio designing dresses, jewelry, and accessories, and later specialized in designing fabrics. Following a 1994 visit to the Metropolitan Museum of Art, in New York, she dreamed up the idea of paper costumes, for which she has become world renowned.

Isabelle de Borchgrave: "New Paintings and Sculptures" is a departure from the work shown at the Legion. Instead of the monochromatic palate of the earlier show, the works at Sorokko feature pieces in vibrant colors, tribal patterns, and ethnic textiles 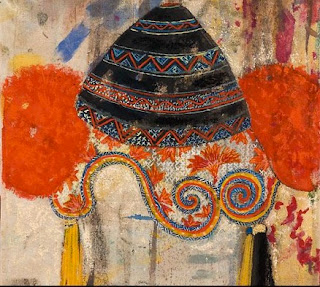 
In de Borchgrave's art, the starting point is almost always the same: sheets of paper one meter by one and a half meters (3.3 feet by 4.9 feet), which she sets to work on with her brushes and paints on an enormous linen-covered table in her studio in Brussels. "Her colors, reports The New York Times, "are very much inspired by her travels: reds from the roses of Turkey, earth hues from Egypt, blues from Greece...Borchgrave produces astonishing effects of scintillating color, weight, transparency and texture. Her renderings of diaphanous gauzes are especially astonishing." 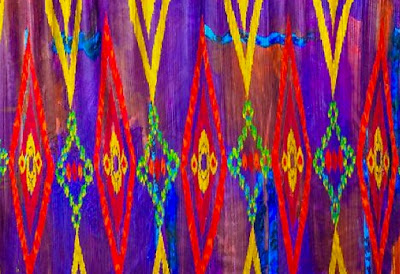 The exhibit is an expertly curated display of the artist's range and unique ability to transform a common medium into the otherworldly. Givenchy puts it beautifully, "Isabelle is one of a kind. She plays with paper as a virtuoso plays an instrument."

Best of all for those with a bit of spare change -you can now buy the dresses at a mere $45,000 per item.

Suhas Bhujbal at Dolby Chadwick: The Indian born artist, more known for his geometric compositions, has new work which fuses his previous fascination with urban landscape with luminous figurative works. 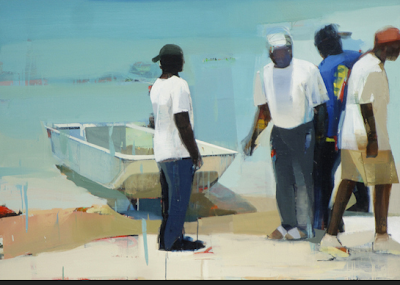 Bhujbal. Getting Ready for the Day

During a 2011 trip to Cat Island in the central Bahamas, artist Suhas Bhujbal found something he craved: peace and quiet. The island's lifestyle -- one in which people gather on the beach and enjoy each other's company -- reminded him of his childhood in India. "I appreciate the simplicity in life," he comments. "I paint what I see, experience, and feel. It is really about falling in love in that moment and bringing that on the canvas in a visual form." 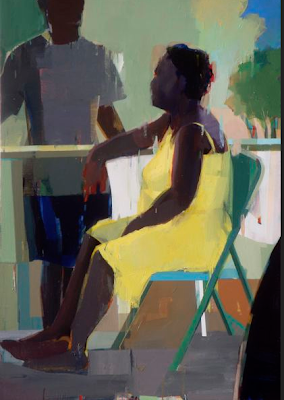 http://www.examiner.com/list/isabelle-de-borchgrave-at-serge-sorokko-suhas-bhujbal-at-dolby-chadwick
Posted by Nancy Ewart at 3:41 PM No comments: 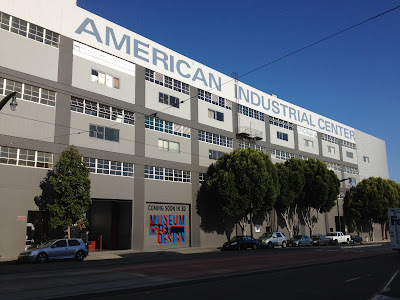 After losing their space in 2010, the Museum of Craft and Design has finally found a new home in the old American Can Company factory on the edge of Dogpatch, San Francisco's latest trendy district. The public opening kicks off tomorrow, Saturday April 6, 2013, with a community celebration of the new museum and inaugural exhibits.
The new location is at 2569 Third Street in San Francisco. For more information, go to sfmcd.org.

At the Cantor: Revisiting the South: Richard Misrach’s "Cancer Alley"

Like the Western landscapes for which Misrach is best known, these photographs challenge viewers with environmental, political and social concerns while engaging them with evocative and lyrically beautiful large-scale prints. In focusing on the delicate state of the Mississippi River, Misrach signals not just the environmental challenges facing the South but also the larger costs of our modern world at the dawn of the 21st century. His photographs are a stark commentary on the concentration of petrochemical complexes located along this 100-mile stretch of the Mississippi River.

For the 85 miles between Baton Rouge and New Orleans, the haunting swamplands of the Mississippi River corridor—called America’s wetland for its biological value to the nation—bump up against the sprawling refineries and paraphernalia of the petrochemical industry. Industry leaders call this stretch of the Mississippi, sandwiched between 150-plus oil and gas plants on both sides of its devastated banks, Chemical Corridor. But locals—who blame the millions of pounds of toxic chemicals pouring out of industry smokestacks every year for high rates of miscarriages, cancer, respiratory ailments and other serious diseases—have another name for it. They call it Cancer Alley.

Looking through Misrach’s lens, the viewer comes to realize that Cancer Alley’s industrial corridor—which produces almost one-third of America’s gasoline, plastics and other chemicals—is generating a lethal combination of pollutants that is quietly deteriorating local communities and watersheds, leaving behind only cryptic relics of what was once a richly diversified past. 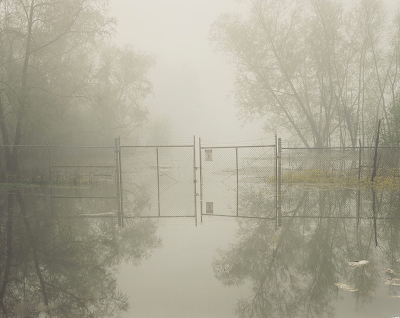 But his images do more than hint at pollution and death: The petrochemical industry reveals itself as an omnipresent and brazen specter through the photographs’ rusted pipelines, mammoth tankers and tangles of steel, concrete and smokestacks belching noxious fumes and toxins into the air and water.

The exhibition “Revisiting the South: Richard Misrach’s Cancer Alley” highlights the severe environmental degradation of the Mississippi River corridor from Baton Rouge to New Orleans. The show, which includes 19 large-scale color photographs and 14 contact sheets, is on view from March 27 to June 16, 2013 at the Cantor Arts Center, Stanford.

http://www.examiner.com/article/museum-of-craft-and-design-reopens-misrach-s-cancer-alley-at-the-cantor?CID=examiner_alerts_article
Posted by Nancy Ewart at 3:42 PM No comments: