My Home Is Far Away 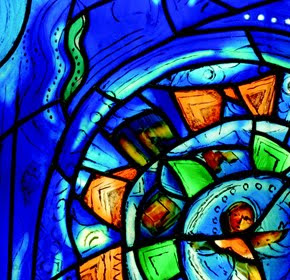 Roving correspondent here, with a report from Chicago.

My grandparents, whom I loved so much and still miss, although they have been dead and gone lo, these many years, were of the generation that embraced the concept of the chain restaurant, and found particularly attractive the notion that no matter where you were--Omaha, Nebraska, or Oceanside, California--if you went to a Bob's Big Boy, well, you were sure to get the same burger and fries.

Predictably, and probably partly in reaction to having eaten so many of those damn burgers, I hate chain restaurants. But I see the allure. When you travel, when you are a long ways from home, you do feel a sense of disorientation. I also feel this sense on holidays, that the world is a different place from the one I am used to.

I was in Chicago on business last week, that beautiful city, and it was a magical trip. (Even the traveling itself was fascinating. I met a sexagenarian businesswoman who wore intimidating jewelry and long grey dreads, and who owned 7 El Pollo Locos and 9 Burger Kings, and man! Did she have some stories to tell! Although I steered the conversation away from politics, because you can imagine how someone whose wealth came from the sweat of others over her grills feels about being compelled to provide health care for those others.)

The disorientation is part of the magic, it stirs everything up, like shaking a snow globe, it's good. And yet, when you retire for the evening, whether it be in your luxury hotel overlooking the skyline or in the spare bedroom at your friend's brick house two doors down from Codger Corner (where all the homeowners are septuagenarians, and a story about the neighbors frequently begins with "My neighbor was trying to get his wife's wheelchair out of the house/into the car/out of the car/onto the sidewalk"), you lie in bed and have that strange feeling of not being quite sure who you are.

This is where the art comes in. (I apologize for the lengthy setup.) I stayed with a friend in Chicago, and when she asked what I wanted to do, I said I wanted to see as much art as possible, and have as much fun as possible. My friend took me at my word. On Friday night, we drove around the suburbs and looked at Frank Lloyd Wright houses. On Saturday, we went on the Frank Lloyd Wright Home and Studio tour, and then--as if that weren't enough--we went to the Art Institute of Chicago.

I've been thinking about this since my return, how to describe the sense of walking into that beautiful house and beautiful studio, and feeling so completely at home in this place where everything is designed and ordered with precise and elegant intention. And of walking through those galleries and falling in love with the haunting Têtes-paysage, 1928 (Francis Picabia), and the angular, vivid Kandinskys. Chagall's America Windows. I still don't quite know how to describe this sense that art gives you of being absolutely at home where you are at that moment. And that the world, some appearances to the contrary and in spite of the struggles (to secure health care for the poor, for example), really is a beautiful place.


P.S. Title from Dawn Powell's My Home Is Far Away. If you don't know of her, she is a wonderful early 20th century American writer who--here it comes, the story of women artists from time immemorial--was overshadowed by the men. In Dawn Powell's case, the men were Hemingway and Fitzgerald. Although Powell is just as great. Some might say better.

Holiday Shopping outside the mall

Think outside the box - the big box stores that is. 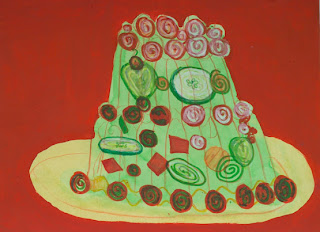 “Fruit Jello” by Camille Holvoet - Creativity Explored
"Making plans to take advantage of Black Friday shopping deals? We'd rather not, personally, that's why we have the Internet and a stack of Amazon gift cards. But if that's your kind of thing, you might want to start queuing up now because one Lori Davenport has already set up camp in front of the St. Petersburg, Florida Best Buy. As she says, "it's not about being first or any sort of firstness, it's about our own personal firstness...it's about the experience of what this brings to you." (SFist)

It brings you a week's worth of hard nights out on the pavement in front of Best Buy and a brief, if embarrassing, shot at Internet fame. That's what it brings to you.

But if you want to opt out of the buying frenzy, avoid the hysterical crowds and support local artisans, try some of the following craft fairs. The current economic crisis is an unavoidable reality for many organizations as well as individual artists. It has been devastating to a wide array of services, in great part because the availability and wealth of granting agencies has greatly diminished. As a result, individual contributions are a vital artery of support. Your support, now more than ever, is the life-blood of the local arts community, no matter how large or small the gift. The list below is just a sample of what's available, outside the big box stores - the events listed are either local, benefit artists who are not represented elsewhere or non-profit arts organizations that need our support, now more than ever. (Michelle Mansou, Roots Division) 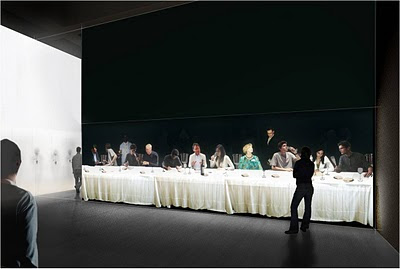 The Judgment of Paris - wall mural at SFMOMA
In vino veritas? Read and find out...
http://www.examiner.com/museum-in-san-francisco/sfmoma-how-wine-became-modern-design-wine-1976-to-now-review
Posted by Nancy Ewart at 3:45 PM No comments:

A Visit to Porchlight for Stories About Art 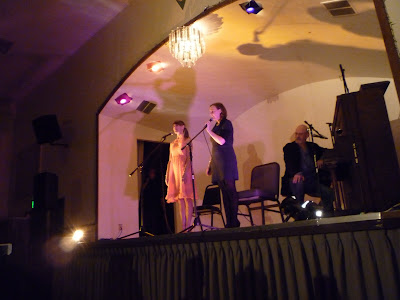 This past Monday I went over to the Verdi Club to see "Don't Call Me Retard," one of Arline Klatte and Beth Lisick's monthly storytelling series - this one benefitting Creativity Explored. The storytellers were teachers and students at the Mission art studio that serves artists with developmental disabilities. Or, as one of the speakers described the place, "a safe haven for the vulnerable."

The joy, awe and inspiration was almost more than that little old dance hall could contain. The program alternated solo standup stories with interviews, and video presentations. There was a common thread between all of the presentations, by teachers and students alike, and it was the pleasurable surprise and wonder that occurs when creativity is nurtured, witnessed, and appreciated. 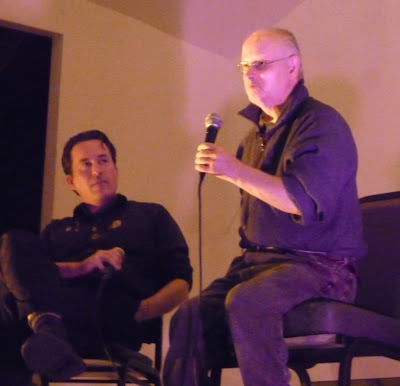 Thomas Pringle is an entertaining fabulist who regaled us with his stories of catching a Great White Shark in San Francisco Bay and becoming the youngest professional baseball player at the age of two. 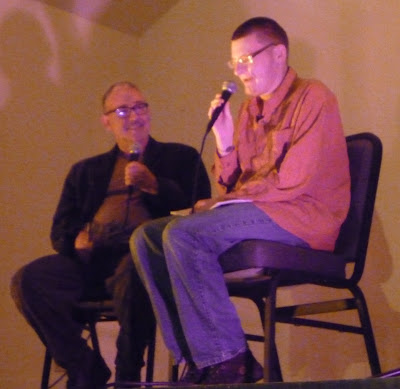 Whitman Donaldson read from his graphic novel about his experiences living with Prader-Willi syndrome and told another story that involved mythic cupcakes and mother love. 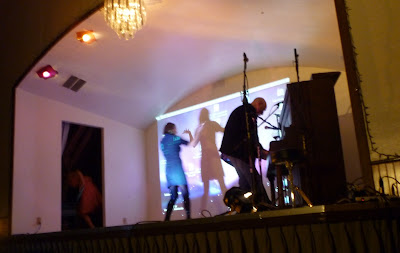 When the video presentations developed technical glitches, Klatte and Lisick did impromptu dances.

The videos used images and recordings of student work to tell stories that were impractical for the stage. One of the most powerful was by Than Diep. She illustrated a story about her early life, accompanied by the keening sound of her natural voice and the mechanical voice of her communication device. I don't think I'll ever forget it. I wish you could see it. But check out this short video of Than Diep in the studio.
Posted by Anna L. Conti at 3:35 PM No comments:

Anna wrote up a marvelous report about our fabulous Friday night in downtown SF - art, food, friends...go and read about it at:
http://workingartistsjournal.blogspot.com/
Posted by Nancy Ewart at 10:20 PM No comments: 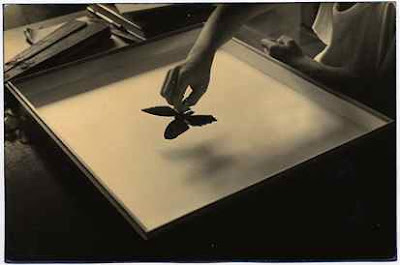 I prefer the intimate experience of looking at small prints. I print and display my own photographs small for that very reason. When I walked into the Robert Koch Gallery last evening I was more than pleased to see the entire gallery devoted to an exhibit of Masao Yamamoto's exquisitely crafted photographs, most no larger than 4X6 inches. 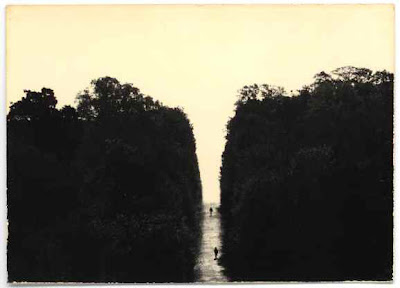 Everything about the exhibit played to exactly what I love about photography: intimate view of subjects presented in a manner that invites the viewer into that intimacy while offering a fresh and often unique perspective. 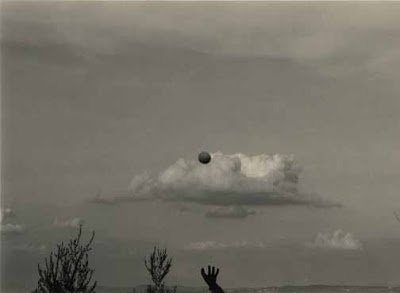 Yamamoto's vision and process transcends the generations of photographic pursuit. Many of his images evoke pictorialism and classic figure study, but they are in fact beyond all that and firmly planted on a most contemporary point of view. 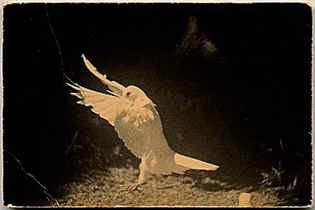 "If I take small photos, it’s because I want to make them into the matter of memories. And it’s for this reason that I think the best format is one that is held in the hollow of the hand. If we can hold the photo in our hand, we can hold a memory in our hand. A little like when we keep a family photo with us." -(quote from an interview posted to lensculture)

The work of Masao Yamamoto is on view through December 24, 2010 at the Robert Koch Gallery, 49 Geary, San Francisco.

Photos by Masao Yamamoto, courtesy of Robert Koch Gallery
Posted by David W. Sumner at 9:51 AM No comments: 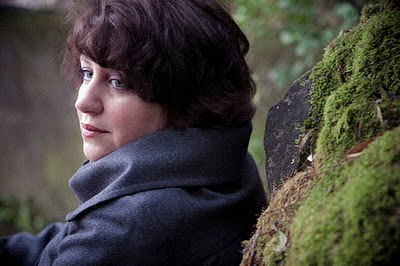 @ Julie Michelle
New post up at:Chez Namaste Nancy
Posted by Nancy Ewart at 10:54 AM No comments: