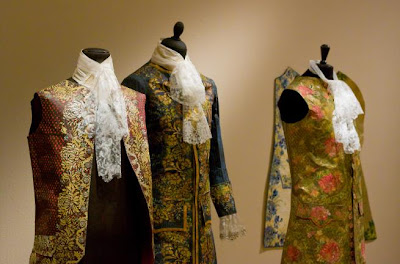 
The jaw dropping moment was learning de Borchgrave made the lace scarves and dress accents by delicately applying white paint to large sheets of lens paper. Incredibly real looking, as was the bead work created from finely dripped paint. 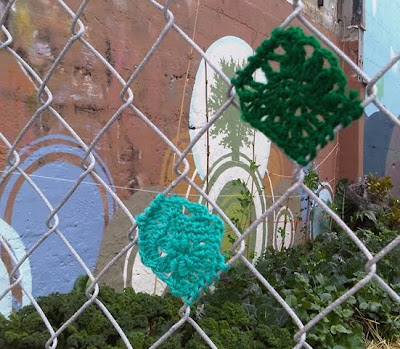 I ran across Thompson's web site while checking out an East Bay WordPress Meetup group. Among her other endeavors, Thompson crochets squares of yarn in chain link fences. Looking forward to a public show. 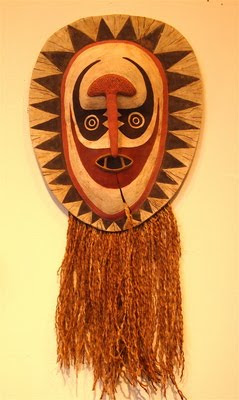 On display at this weekend's Mission Artists United Open Studios, many of Gobet's colorful and expressive masks and mini masks looked like carved and painted wood, even up close. 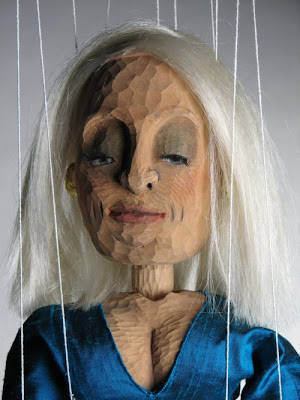 Along with about 40 other people, I took the tour of Recology's dump site (or sea gull and pigeon sanctuary, depending on where you are standing) on Tunnel Road. A stylish woman from eCoexist in India was also on the tour. She said, “When people heard I was going to San Francisco, they asked if I was going to go shopping. I told them, ‘No, I’m going to the dump.’”

Part of the tour included the Artist in Residence studio, where Niki Ulehla was working on many puppets. The puppets are made from wood, leather, feathers, string, chopsticks, and anything else she can find in the drop off area where residents bring their own loads to the dump. You have to take the tour to see the artists in residents at work, as well as the large sculpture garden.

Recology hires Wingmaster Falconry to be on site 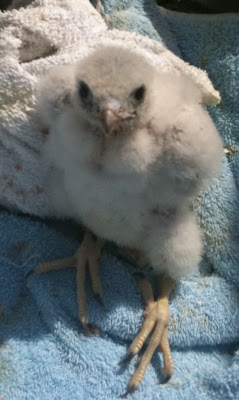 six days a week with falcons and hawks, to scare away the pigeons and seagulls. Apparently they don't attack, just scare.

On the day of the tour, Steve Vasconcellos of Wingmaster brought two trainees. Covered in fine white fuzz, both looked like dandelions with beaks. "The Claw" above was just a few days old. "Mr. Cranky Pants" below was a few weeks old, and had dark feathers underneath his fuzz. 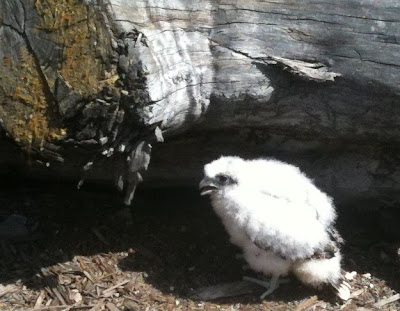 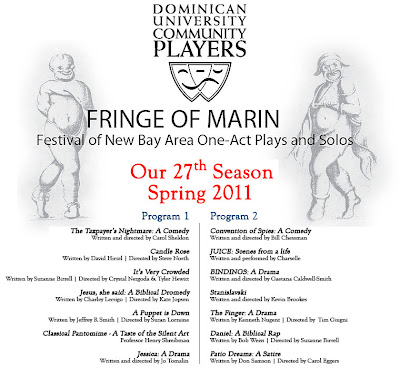 The 27th season of Fringe of Marin Festival of new Bay Area one act plays and solos will be held at Dominican University on Friday, Saturday and Sundays April 15 and May 8, 2011.

The fourteen plays in the Festival include one written by theater critic Jeffrey R Smith and another by performance poet Charselle Hooper. The fourteen performances are split into two programs on alternating days. Most performances are at 7:30PM, and a few at 2PM matinees. For reservations, directions and information call: (415) 673-3131.
Posted by Phil Gravitt at 3:20 PM No comments: