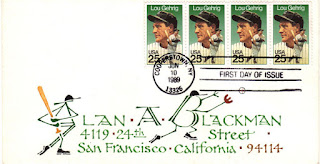 Secreted in the basement of the San Francisco Main Library is the Jewett Gallery, one small plain room that often hosts noteworthy exhibits.  “Letters to Myself” refers to Alan A.Blackman’s collection of postcards to himself with new stamps and first day issued postmarks.
Over many years, calligrapher Blackman sent money for multiple stamps to the issuing post office, along with a self-addressed post card, with his name and address in varying fonts, colors, and styles drawn in the same theme as the new stamps the post office attached to mail back to him.
The letters of his name stand on skates for Olympic Stamps, golf balls fly through the air on golf stamps. On bridge stamps, his name is suspended between towers.

Blackman received first day issue stamps from around the world. The collection also includes letters to his son, to whom the exhibit is dedicated.
The exhibit notes that Blackman no longer lives at any of the addresses on the post cards.
Blackman brought to mind another postal worker in the art world: Herb Vogel

Posted by Phil Gravitt at 11:19 AM No comments: 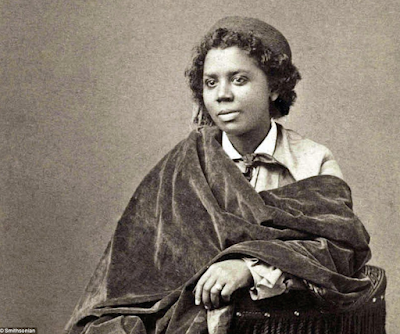 An important work by the 19th-Century Edmonia Lewis (1842-1907), has come to light. The marble 1870 "Bust of Christ" is in the collection of the Bute family on the Isle of Bute in Scotland.

http://www.examiner.com/article/important-work-by-19th-century-american-sculptor-edmonia-lewis-comes-to-light
Posted by Nancy Ewart at 8:10 AM No comments: