Making a Body of Work

Unfortunately, this is a bit of old news, but I still wanted to write briefly about an installation last month at Side Show Studios (in Sacramento) by Susan Li O’Connor. Looking at the works and talking with Susan gave me some valuable insight into how she – or any artist – might choose to go in a certain direction or make a body of work. 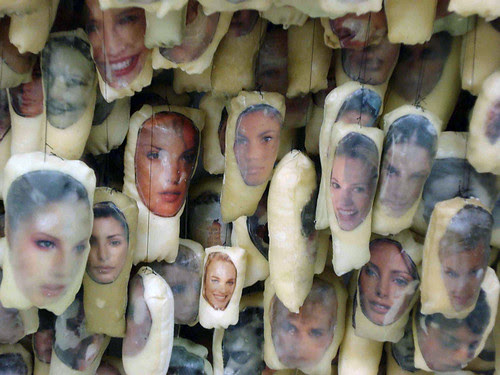 “Minus One But No One’s Counting” (detail) mixed media work by Susan Li O'Connor, shown at Side Show Studios in Sacramento, CA; Nov. 2007

Several of the pieces in this show were mixed media collages that include elements from telephone books and fashion photographs. The idea came partially from the observation that telephone books list the names and numbers of thousands of separate individuals and then put them all together, making up a collective unit. The resulting artworks are studies in alienation and community, and the ways people can connect (or fail to). 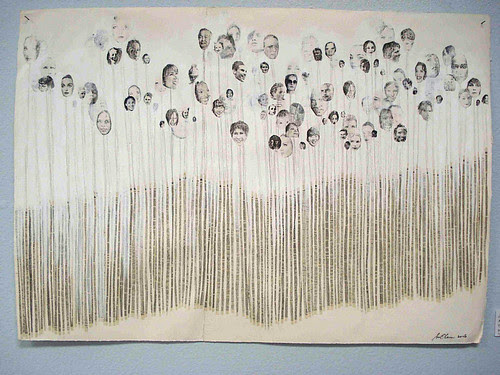 In one of these pieces, “The Directory,” (above) individual heads appear to float like balloons, anchored with strips from the telephone directory, which form a mass at the bottom of the piece.

“Crossing the Great Divide” (below) seems to be a comment on the ways men and women connect – or don’t. Looking at the piece, it feels amazing that people ever successfully navigate the space between them. 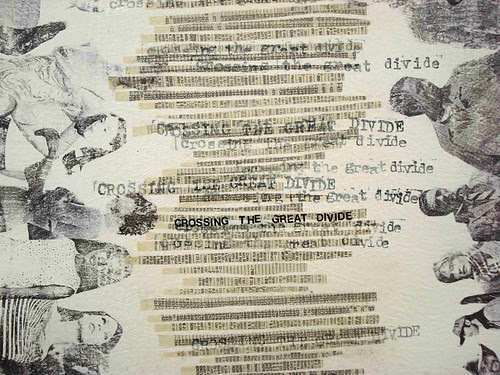 One of the more unusual pieces in the show was “Minus One But No One’s Counting.” (Detail at top, more images here.) It’s a complex piece made up of dozens of pillow-like elements onto which photos of faces from magazines have been applied, then covered with wax. Each “pillow” is suspended from a separate string. Each is attached to the wall with a T-pin, then they are all hung together to form a collective, oddly fleshy-looking mound of humanity at the bottom.

Susan says about this piece, “My thought process for [this piece] stems from my interest in the subject of individual vs. the masses. The piece dates back to 2002, and several other pieces from that time also include images from magazines, particularly fashion magazines. At the time, I was interested in the idea of an average person being unrecognizable vs. a celebrity person, and how much we think we know that person simply based upon images we'd seen in the mass media.” 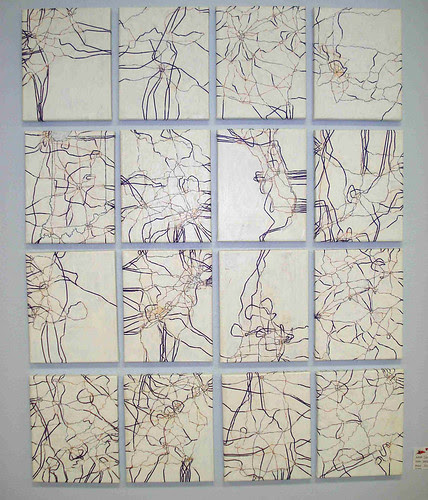 Also represented in this show was the “Mapquest series,” (above) a set of small mixed-media works on canvas based on the lines of interstate highways leading into and out of cities in each state. She follows the converging lines around cities, then as they begin to lessen and spread out, she emphasizes the lines reaching out to the edge of each small canvas. The result looks like a grid of abstract encaustic pieces – but each piece has an oddly familiar look to it, being based on the road maps we’ve all studied.

The largest piece in the show was a floating wavelike sculpture made of tealight holders and plastic twist-ties. You can see in the photo that it floats above the gallery’s seating area like a silver cloud-creature, responding to touch and any currents of air coming into the room as the door opens.

Taken all together, Susan Li O’Connor’s pieces show how an artist can begin with a question or an idea and then interpret it in a multitude of ways to build a body of related work.

More photos at the BAArtquake Flickr pool.
Posted by bluemonk at 12:44 PM