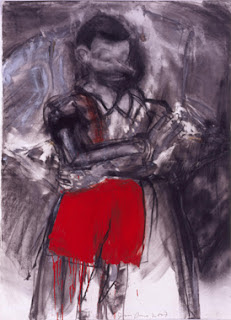 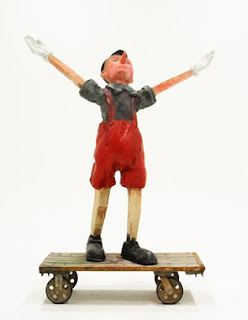 A lot of galleries are closed between now and the New Year so the pickings are slim but there are a couple of interesting (if uneven) shows. Berggruen is showing new work by Jim Dine based on the legend of Pinocchio. According to the press release, Dine perceives that "this idea of a talking stick becoming a boy, it's like a metaphor for art, and it's the ultimate alchemical transformation." His Geppetto is a self-portrait, alluding to the artist as creator, who in giving life has a connection with the Divine. Frankly, I think that’s way over the top for a show that has some visual interest but hardly gave me any frisson of excitement. The paintings have a nice (maybe that’s not quite the right word) slapdash painterly finish, a la Francis Bacon. The Pinocchio sculptures are made of wood, charred wood, stained wood and cast aluminum. Made mostly by his assistants, they have the same sort of finish as the wall paintings but don’t work particularly well as three-dimensional objects. I suppose that if you like Walt Disney, you'll love this show but for me, it was an unsuccessful juxtaposition of POP, paint and hype to promote his book. I kept seeing Mickey Mouse superimposed on Pinocchio’s long nose and felt that Dine has crossed the line from Pop into kitsch.


Berggruen: Jim Dine “Pinocchio as I knew him.”
Up until January 5th: http://www.berggruen.com/
(Images from the Berggruen website)
Posted by Nancy Ewart at 7:38 PM