Ai Weiwei at Alcatraz and 'Songs of Freedom'

Ai Weiwei, @Large: Ai Weiwei on Alcatraz explores human rights and freedom of expression in the context of this iconic historic site. Installed across four locations on Alcatraz and on view from September 27, 2014, through April 26, 2015.

The seven installations commissioned by the FOR-SITE Foundation for @Large include: 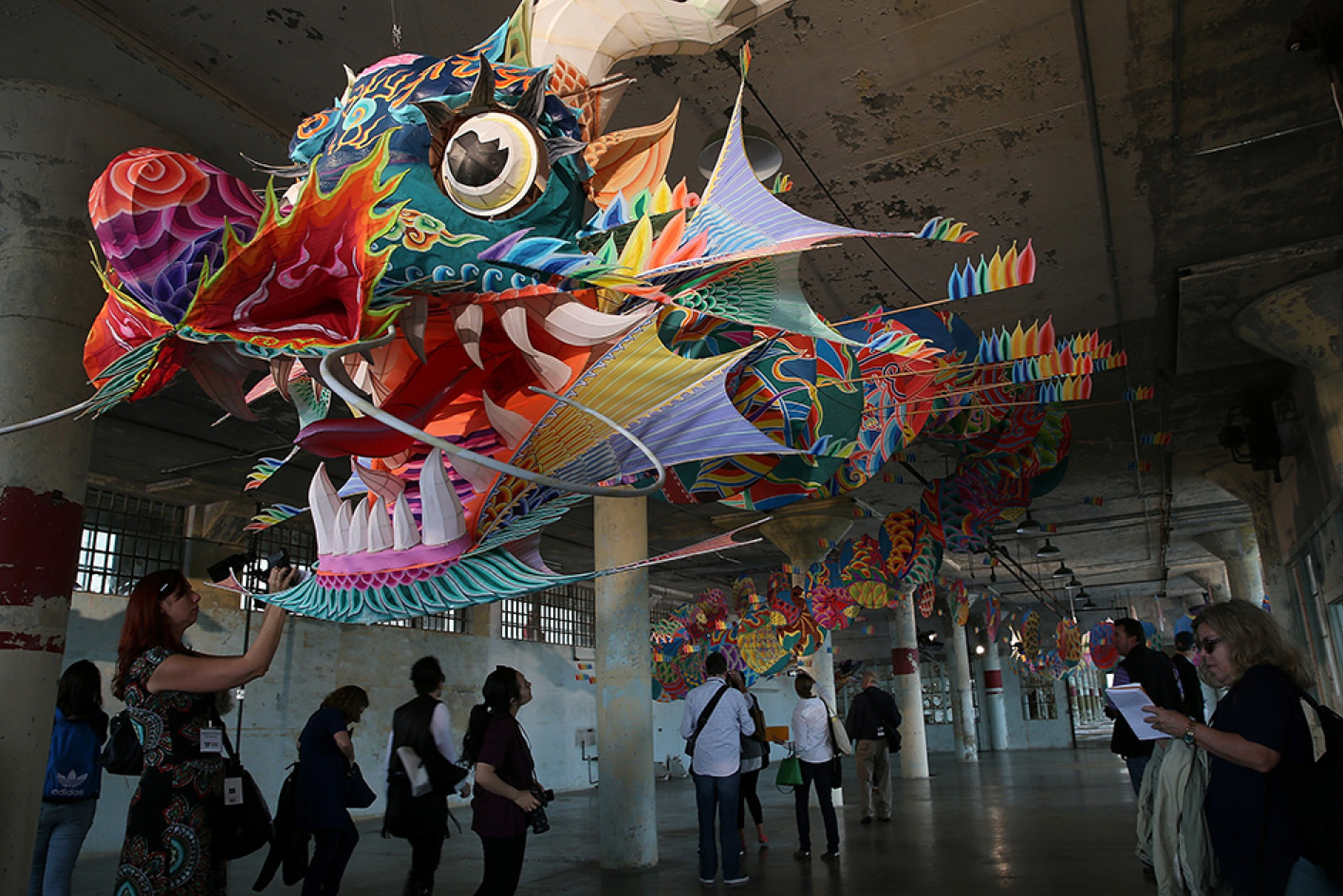 • With Wind, New Industries Building: This large-scale installation, located in the building once used for prison labor, features a contemporary version of the traditional Chinese “dragon kite,” a large kite handmade by Chinese artisans in collaboration with Ai’s studio. Scattered around the room are other kites decorated with stylized birds and flowers, which speak to the natural environs of Alcatraz Island—an important bird habitat—and reference 30 nations with serious records of restricting their citizens’ human rights and civil liberties. The position of the kites—trapped inside a building, unable to fly—suggests the powerful contradiction of freedom and restriction. 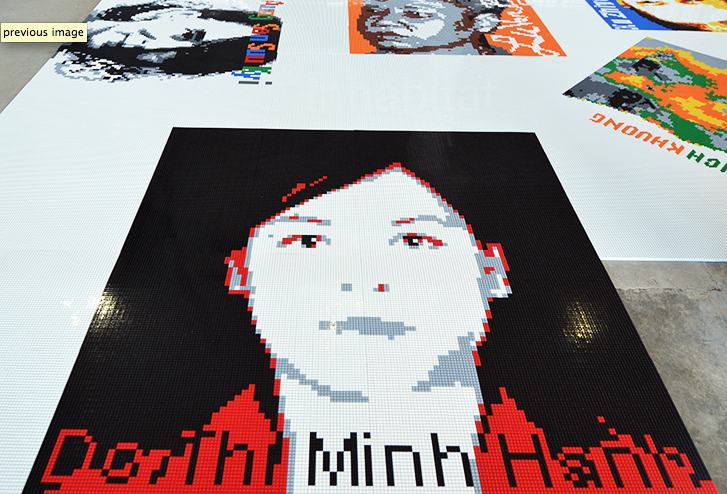 Do Thi Minh Hanh, a young Vietnamese labor activist, was released from prison on June 27 after serving four years of a seven-year sentence for leafleting in support of footwear workers striking for better working conditions and higher wages. During her imprisonment, she suffered repeated beatings at the hands of prison guards and other inmates. 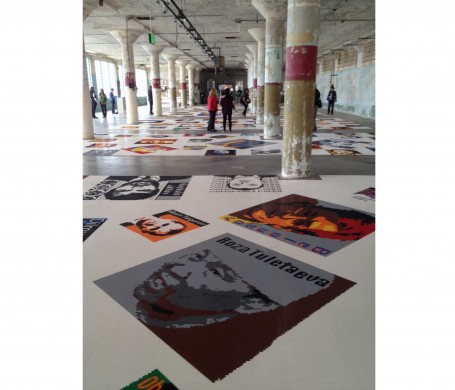 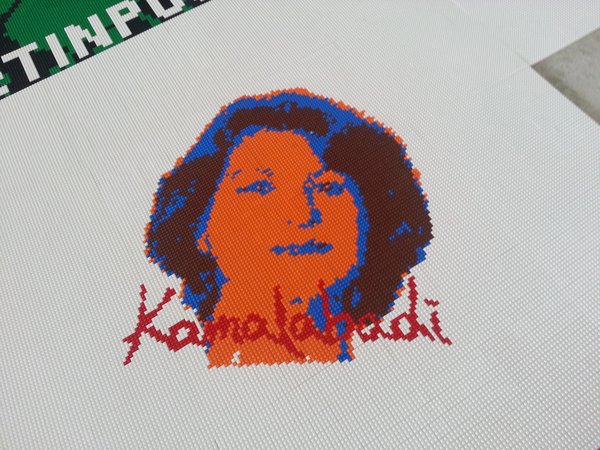 Fariba Kamalabadi, who was jailed in Iran, for being a leader of the Baha'i faith

• Trace, New Industries Building: 175 portraits, constructed from LEGO® bricks,  are laid out on the floor. Each portrait represents an individual who has been imprisoned or exiled because of his or her beliefs, actions, or affiliations. 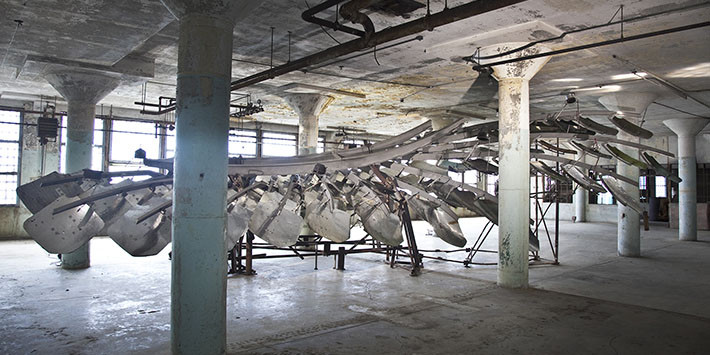 • Refraction, New Industries Building: Using the imagery of flight to evoke the tension between freedom and confinement, this monumental installation—weighing more than five tons—is modeled after a bird’s wing. The artwork is composed of reflective panels originally used on Tibetan solar cookers. 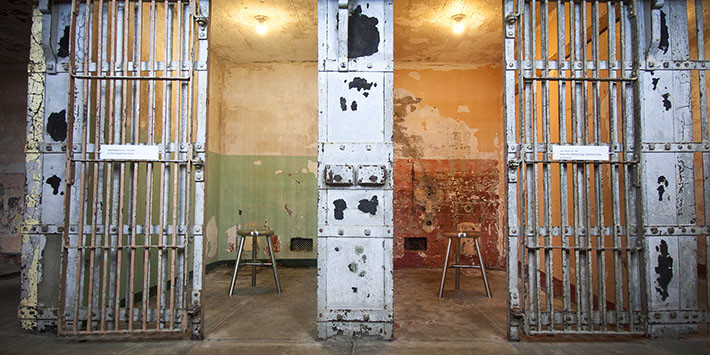 • Stay Tuned, A Block: Stay Tuned invites visitors into 12 individual cells in A Block, where they can sit and listen to spoken words, poetry, and music by people who have been imprisoned for the creative expression of their beliefs—as well as works created under conditions of incarceration. Each cell features a different recording, such as works by the Russian punk band Pussy Riot and the South African anti-apartheid activists Robben Island Singers.

• Illumination, Hospital (Psychiatric Observation Cells): The psychiatric observation cells, used for the isolation and observation of mentally ill inmates, resonate with chanting recorded at a Buddhist monastery and a traditional song of the Hopi tribe. In the 19th century, the Hopi, along with other American Indian Tribes, were subjected to a program of forced 'Americanization." In 1895, 19 of them were imprisoned here for a year.

The installation of chants raises an analogy between subjugated peoples and those who have been classified as mentally ill—both often dismissed, deprived of rights, confined, and observed. Illumination speaks to the profound role of chanting as a source of comfort, strength, and identity under severe circumstances. 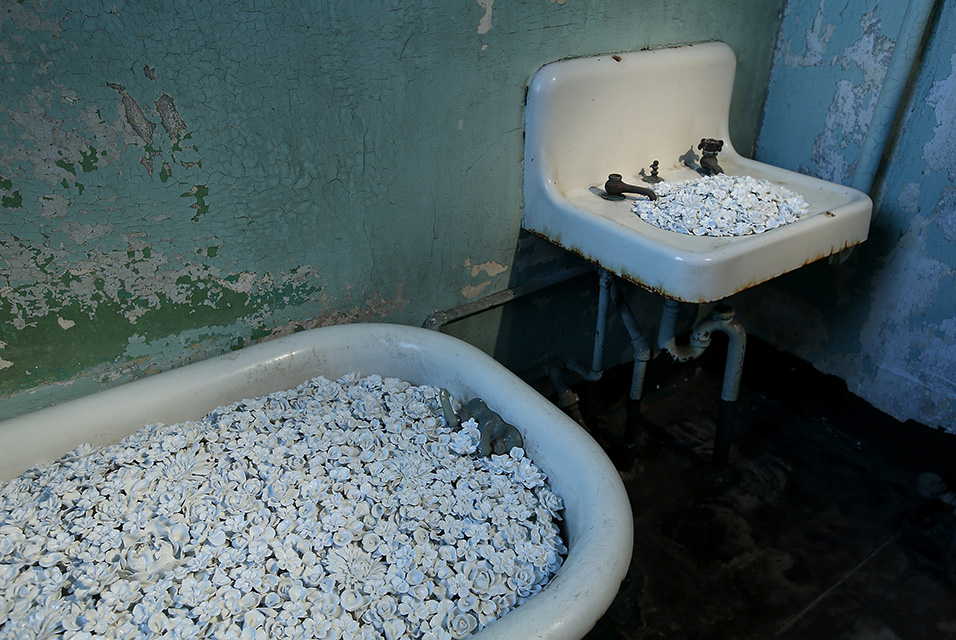 • Blossom, Hospital: With intricately detailed encrustations of ceramic flowers, Ai transforms the utilitarian fixtures (sinks, toilets, and tubs) in several hospital ward cells and medical offices into porcelain bouquets. The flowers, rendered in a cool and brittle material could be understood as an ironic reference to China’s famous Hundred Flowers Campaign of 1956, a brief period of government tolerance of free expression, immediately followed by a severe crackdown against dissent. 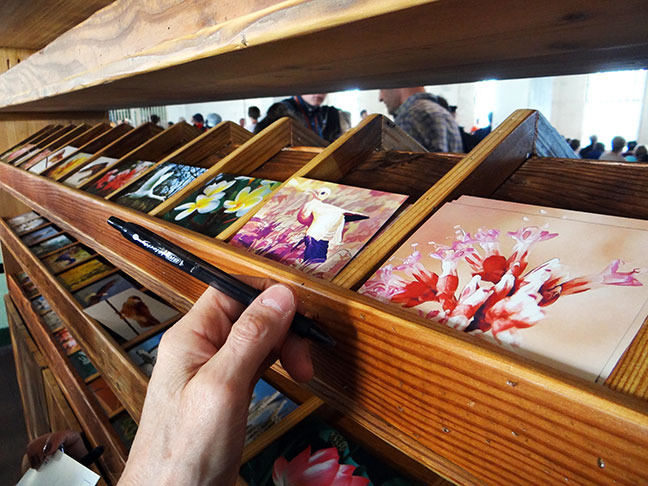 • Yours Truly, Dining Hall: In this interactive work, visitors are encouraged to write postcards addressed to some of the prisoners represented in Trace. The cards are adorned with images of birds and plants representing the nations where the prisoners are held. Ai has spoken of the deep feeling of isolation that afflicts incarcerated people and the fear that their causes have been forgotten.

Ai Weiwei at Alcatraz is organized like your high school English papers - find out what the teacher wants, tell the teacher what you are going to say, say it and tell them again. The installation is huge, overwhelming, chaotic, and lacks nuance and in some cases, historical accuracy. Of course, it's this season's must see show.

I realized that Ai's images didn't make any sense without extensive text. But I have a real problem with that - if the visual doesn't convey the message, is it really art - or, in this case propaganda that could have just as easily been written in a book. Now I agree with many of Ai's ideas about political prisioners, the lack of democracy around the world and the totalitarian state as well as the injustices of the past.

BUT to link that with the criminals who were held on Alcatraz and make no distinction between them, the actions taken during Alcatraz's over 100 year history and now is sloppy history, If not sloppy art making.

For more about some issues with the exhibit: http://www.examiner.com/article/ai-weiwei-s-songs-of-freedom-on-alcatraz

Posted by Nancy Ewart at 9:55 AM No comments:

Email ThisBlogThis!Share to TwitterShare to FacebookShare to Pinterest
Labels: Ai WeiWei at Alcatraz and 'Songs of Freedom' 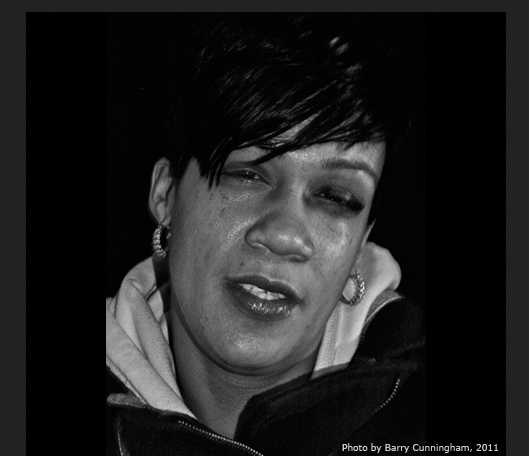 Pin-Up Show at Dickerman Prints: For one night only, Dickerman Prints hosts an audience participatory photo show.  Those who attend are encouraged to bring their favorite prints and pin them the wall. 50% of sales will benefit the SF non-profit "Sixth Street Photography Workshop" which brings photography to the residents of SF's hotels and shelters on the Sixth Street corridor. The other 50% of sales will go to the photographer.

How it works: Bring a favorite print (or prints under 16"x20"), and Dickerman will provide the magnetic pins for you to hang them with. Price your photo(s) accordingly. Browse others' works on display while enjoying a complimentary glass of wine or a cold beer and mingle with local photographers. Buy a print from another photographer, if you wish. Your money will help to support "6th St Photography Workshop" which brings the art of photography to the homeless and transient residents living in the 6th St corridor.

Have a great evening socializing with other Bay Area photographers and helping to support a wonderful local organization! Plus, maybe you'll sell a print or two!

There is no cost to participate, and all are welcome.

More weekend picks at: http://www.examiner.com/article/san-jose-museum-of-art-dickerman-prints-koch-gallery-treasure-island-lecture
Posted by Nancy Ewart at 11:14 AM No comments:

Last week, I went to as many galleries as I could and I haven't begun to sort things out yet.  But for me, the standout gallery show was the exhibit of iconic Bay Area figurative painters at the John Berggruen Gallery. 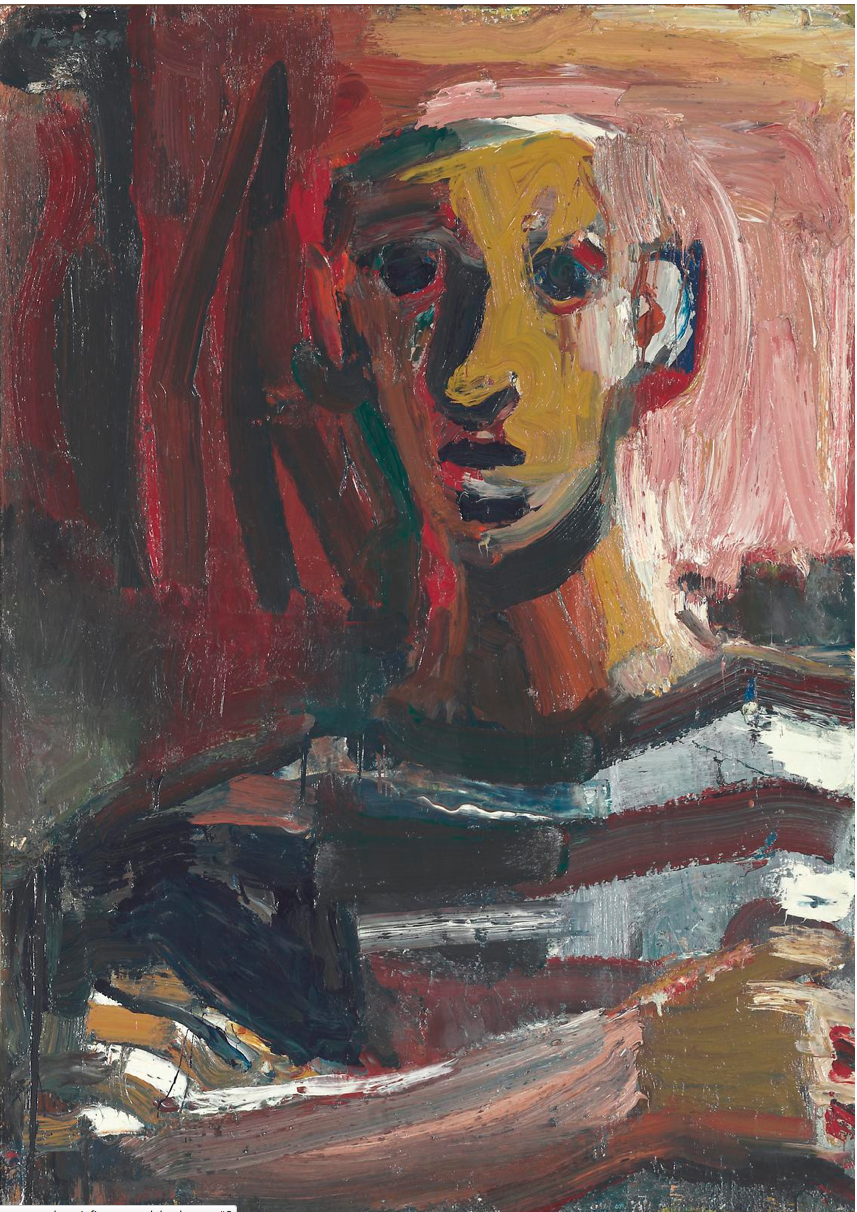 More at: http://www.examiner.com/article/david-park-richard-diebenkorn-nathan-oliveira-manuel-neri-at-john-berggruen
Posted by Nancy Ewart at 12:27 PM No comments:

The Poetry of Parmigianino's 'Schiava Turca' at the Legion 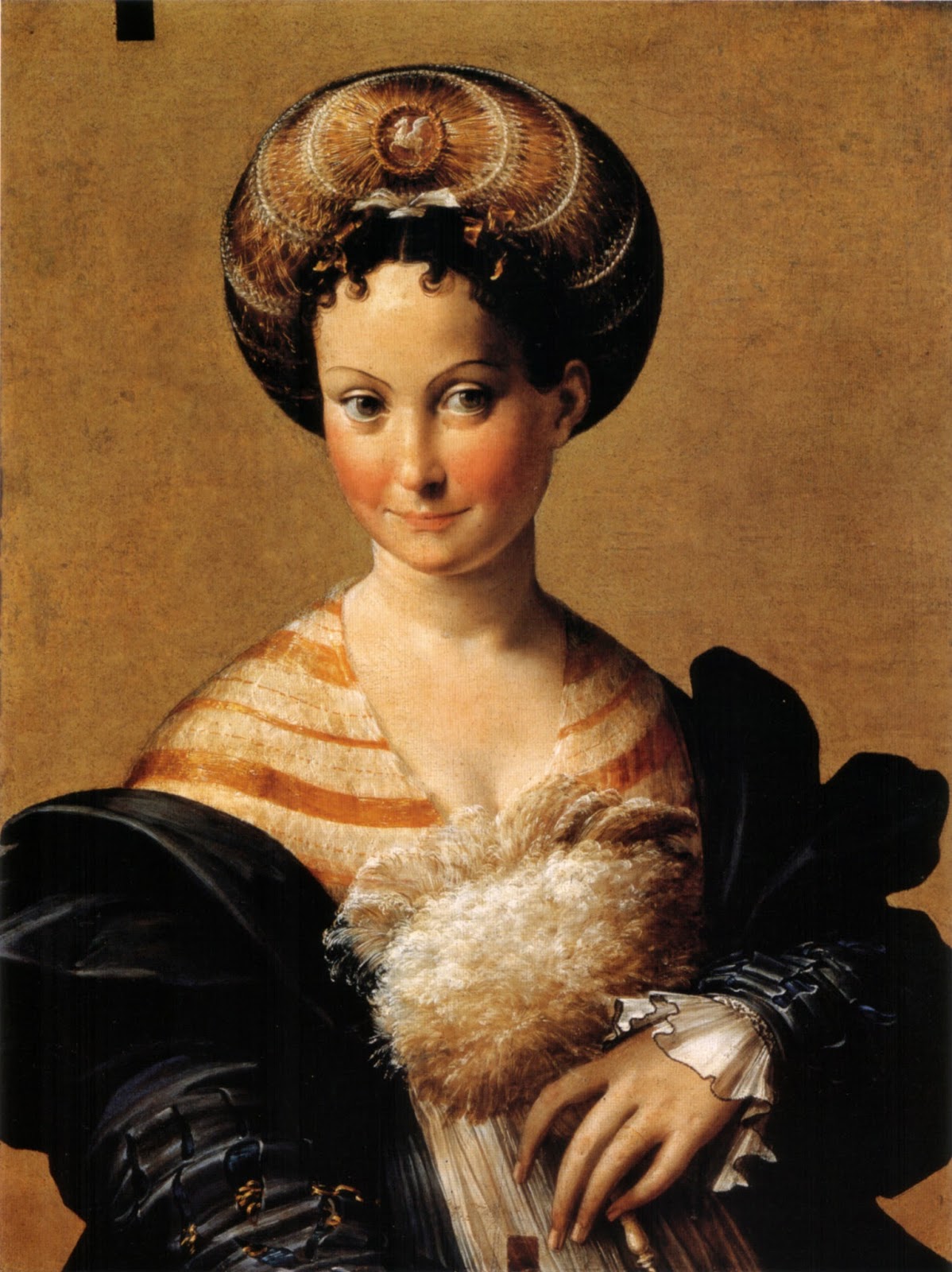 "Schiava Turca” (“Turkish Slave”) arrived at the Legion of Honor, cloaked in mystery. A small painting, set within an elaborate gold frame, the lady is winsome and coy, from her stripped turban, heavily rouged cheeks and delicately arched eyebrows to the tips of her graceful fingertips. On loan from the Galleria Nazionale di Parma, it was painted between 1531 and 1534 in Parma.

More at: http://www.examiner.com/article/the-poetry-of-parmigianino-s-schiava-turca-at-the-legion
Posted by Nancy Ewart at 11:24 AM No comments: 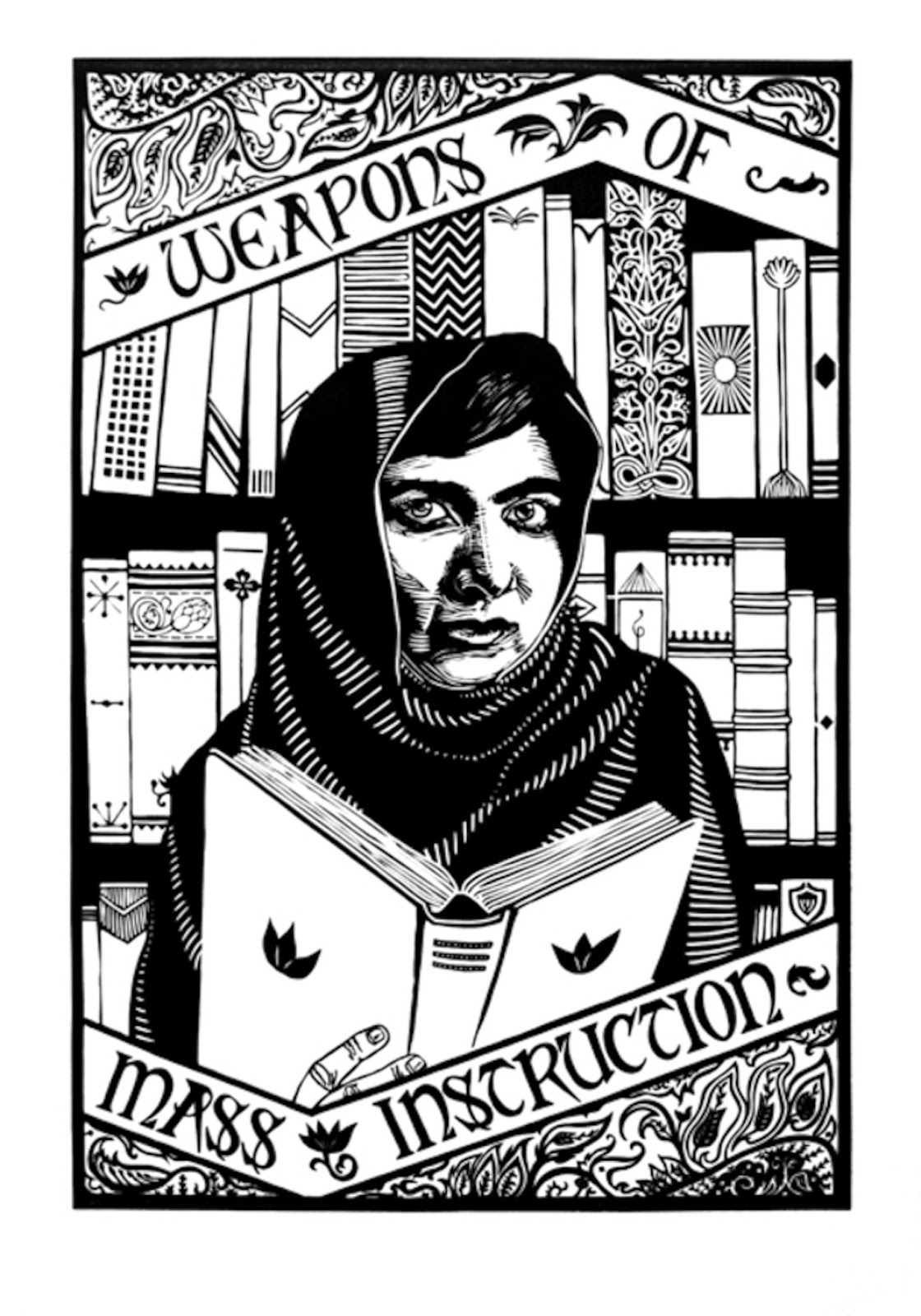 Can’t resist local art finds with a unique sensibility? You won’t want to miss this special benefit evening of “FourSquared,” a collection curated for art enthusiasts with a strong abiding interest in local, affordable art. Created by some of the most talented Bay Area artists, these sixteen small works, presented in clusters, give the experience of sixteen micro solo exhibitions.
Admission is free and all works are priced under $500. Best of all, your purchase of artwork supports Goodwill’s job training and placement mission, giving local people in need a second chance through the power of work. Thursday, September 11th - 6 -9 p.m.

More at: http://www.examiner.com/article/arc-sandra-lee-fouladi-projects-and-kid-friendly-at-the-de-young
Posted by Nancy Ewart at 2:29 PM No comments:

The Anderson Collection at Stanford opens to the public


For the past 50 years, Bay Area art collectors Harry and Mary Margaret Anderson have passionately assembled one of the most outstanding private collections of 20th-century post-war American art in the world. On September 21, more than 100 extraordinary works from their collection will be on view in a new museum adjacent to the Cantor Arts Center: the Anderson Collection at Stanford University.

To celebrate its new neighbor, the Cantor presents an exhibition of spectacular Pop Art works. The show, "Pop Art from the Anderson Collection at SFMOMA,"  runs August 13, 2014 through October 26, 2015.

http://www.examiner.com/article/the-anderson-collection-at-stanford-opens-to-the-public
Posted by Nancy Ewart at 2:05 PM No comments: