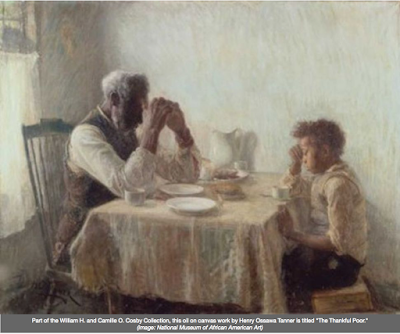 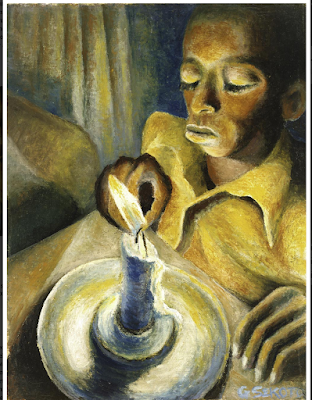 It really is about the artists and the Cosby's have a magnificent collection. Many of these artists, because they are African-American, are little known and little seen:

Highlights of the collection include: Rare late 18th- and early 19th-century portraits by the Baltimore-based African American artist Joshua Johnston
Explorations of black spirituality in the 1894 masterwork “The Thankful Poor” by Henry Ossawa Tanner and in the 1943 painting “Boy and the Candle” by South African artist Gerard Sekoto
The struggle for freedom and equality explored through the 1989 sculpture “Toussaint Louverture et la vieille esclave” by the Senegalese artist Ousmane Sow and the 1982 painting “Still Life: Souvenir No. IV” by the African American artist Eldzier Cortor
History, knowledge and memories explored through Cosby family quilts and African textile
A section on music and urban life that includes African musical instruments and African and African American modern and contemporary works

http://www.examiner.com/article/bill-cosby-s-african-american-art-collection-to-remain-on-view-at-the-smithsonia?CID=examiner_alerts_article
Posted by Nancy Ewart at 8:43 AM No comments:

To start accessing passes to a variety of Bay Area attractions with your Library card, go to: discover.sfpl.org

San Francisco’s Discover and Go program is sponsored by the Department of Children Youth and Their Families (DCYF) and San Francisco Recreation & Parks.

Highlights from past SFAQ projects: http://sfaq.us/event/highlights-from-past-sfaq-projects-2012-2015/
Posted by Nancy Ewart at 11:32 AM No comments: