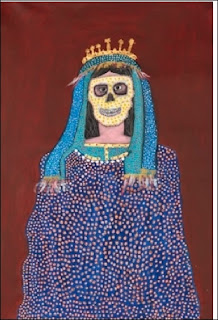 While El Dia De Los Muertos traditionally is a time to pay tribute to deceased relatives and friends, Calacas (a Mexican colloquialism for “skeletons” or “bones”) reinterprets the holiday, as seen through the eyes of Creativity Explored artists in their Mission District neighborhood.

Co-curated by renowned Salvadoran-born artist and Visual Arts Instructor Victor Cartagena and studio volunteer Samantha Hovey, this exhibition focuses on how the community of San Francisco has transformed the holiday into something unique and of ongoing cultural significance to the life of the city.

Each Creativity Explored artist has worked diligently in creating artwork that represents his/her own interpretation and understanding of El Dia de los Muertos, revealing individual, personal and spiritual perspectives. Be sure to experience this intriguing seasonal exhibit, the latest addition to San Francisco’s many Day of the Dead festivities.

Creativity Explored’s 30th Anniversary exhibitions are supported by the Phyllis C. Wattis Foundation. Creativity Explored advances the value and diversity of artistic expression. They provide artists with developmental disabilities the means to create, exhibit, and sell their art in the studios and gallery, and around the world.
Posted by Nancy Ewart at 11:12 AM No comments: 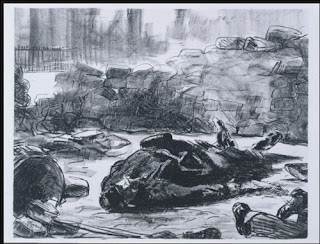 At the Cantor: "Manet and the Graphic Arts in France, 1860–1880." The death and destruction that occurred in the streets of Paris during the Commune of 1871 affected artists of the generation who lived through it or even fought in it, as did Edouard Manet (1832-1883). This exhibition examines how printmakers, draftsmen, and photographers depicted the factors that led to this traumatic event as well as the conflict itself and the changes it brought to Paris. The central image, Edouard Manet’s powerful lithograph Civil War, is shown with 13 works on paper by Felix Bracquemond (1833-1914), Maximilien Luce (1858-1941), Charles Marville (1813-1979), Félix Buhot (1847-1898), and others. Through November 17, 2013.

Romer Young Gallery presents its first solo exhibition with Milan artist Alice Cattaneo, "Nothing quite flat and more round. " For this exhibition, Cattaneo exhibits a new series of sculptures generated during her residency at the gallery this summer. The design of this imaginary architecture within the gallery space takes into consideration a rigorous yet imperfect geometry coupled with a sense of playfulness. http://www.romeryounggallery.com/

The San Jose Museum of Art kicked off its multi-stage exhibition "Around the Table: food, creativity, community." with the work of internationally acclaimed artist Jitish Kallat. In Jitish Kallat: "Epilogue, "the Mumbai-based artist honors his late father through a deeply personal installation. "Epilogue" (2010–11) comprises 753 photographs that depict progressively eaten roti, the round, traditional South Asian flatbread. Each roti represents one of the 22,500 moons that were in the sky during Kallat’s father’s 62-year lifespan.

At the Roxie: "Herb and Dorothy 50x50 ." “Herb & Dorothy 50x50” is Megumi Sasaki’s follow-up to her 2009 film about Herbert and Dorothy Vogel. He was a postal clerk and she was school librarian in New York City, They devoted their modest means to amassing one of the most significant collections of art, particularly conceptual art.

True philanthropists and art lovers, the couple donated their million plus dollar collection to the National Gallery of Art in Washington in 1992. Even after that, the collection was too large to be exhibited. So, in 2008, after an agreement with the museum, the couple said they would donate 50 works to a museum or gallery in each state. This film documents that project, visiting 11 such exhibitions. (Mr. Vogel died in 2012, before the documentary was finished.

Unfortunately the documentary is not a good follow up to the original film. It lacks focus and the music, as SF Chronicle critic Kenneth Baker points out, is sentimental and cloying. The Vogel's were likable, focused art patrons but this documentary doesn't do them justice. http://www.roxie.com/

More at: http://www.examiner.com/list/seven-days-bay-area-art-cantor-romer-young-gallery-sjma-herb-and-dorothy
Posted by Nancy Ewart at 12:38 PM No comments:

The Luttrell Psalter goes on line

The Luttrell Psalter, one of the treasures of the British Library has been digitized and now is on line. Previously only scholars were allowed to handle this fragile, priceless masterpiece. But thanks to the new world of electronics, everybody who loves medieval art and calligraphy can view evey page.

The Luttrell Psalter is one of the most famous medieval manuscripts because of its rich illustrations of everyday life in the 14th century. It was made in the diocese of Lincoln for Sir Geoffrey Luttrell (1276 - 1345) of Irnham, probably sometime between 1325 and 1335. 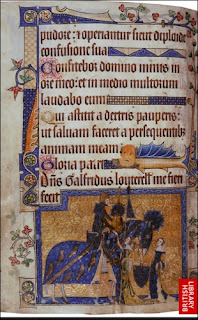 A framed miniature of Sir Geoffrey Luttrell inserted between Psalms 108 and 109 dominates this page. It was not unusual for the patron of a manuscript to appear somewhere, but they would normally be shown in a attitude of devotion. Not only is this miniature the largest in the entire manuscript, but Sir Geoffrey has had himself portrayed as a fully-armed knight, resplendent in his coat of arms. He is attended by his wife and daughter-in-law, both dressed in heraldic gowns, making a visual statement about the successful alliances he has made.

http://www.examiner.com/list/the-luttrell-psalter-goes-on-line
Posted by Nancy Ewart at 12:34 PM No comments:

Opening at the de Young: The Art of Bulgari - La Dolce Vita

"Big girls need big diamonds," as Elizabeth Taylor once put it. Those who share Taylor's leanings should be sure to check out the upcoming exhibit at the de Young. It opens Saturday, September 21st and the glittering babbles (140 or so in all) are sure to be this fall's guilty pleasure. 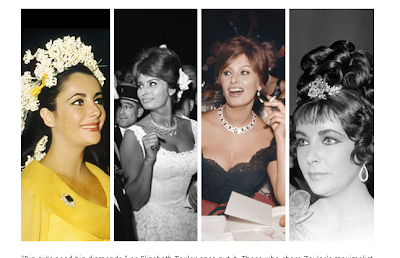 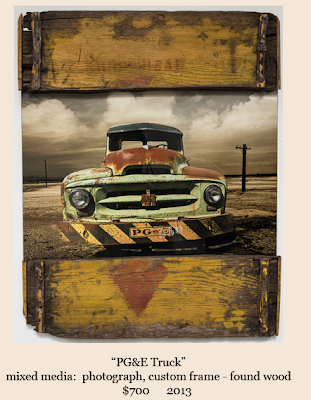 John Fitzsimmons and Kate Flyn at Arc Studios and Gallery

Arc Gallery: "FourSquared" is a unique exploration of the works of sixteen Bay Area artists. Each of the artists has produced sixteen small works, presented in sixteen clusters. "SquaredAlumni" brings together eight of the most popular alumni from previous FourSquared exhibitions at Arc in support of Teen Van.  Arc Gallery will be donating all of its profits from this exhibition and the Alumni artists will be donating a portion of their sales to support the program.

For so many teenagers, life seems a struggle, even without the grave complications of homelessness, poverty or untreated illness. But for those who carry all those burdens at once, life can seem impossible.

The multidisciplinary staff of the Mobile Adolescent Health Services program, one of Lucile Packard Children’s Hospital’s Community Partnership programs, provides expert care, custom-designed for high-risk youth ages 10-25 who rely exclusively on the Teen Van as their only link to a network of services and knowledge they urgently need. Since 1996, Packard Children’s has been mobilizing its experts and sending them out to meet vulnerable teens.

Each of the Alumni artists has produced four works for this fundraiser. All works are priced under $1000.  http://www.arc-sf.com/index.html
More about the weekend picks at: http://www.examiner.com/list/weekend-picks-spoke-art-bam-pfa-arc-gallery-cantor-thomas-reynolds

Posted by Nancy Ewart at 2:21 PM No comments:

Yerba Buena Family Day Back for its sixth year 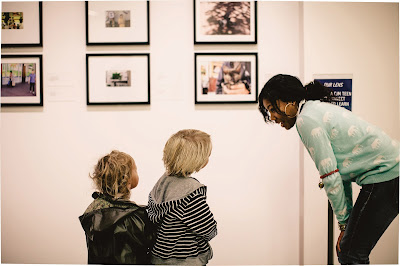 This Sunday, September 15, San Francisco’s biggest free family block party is back for its sixth year! Yerba Buena Family Day is a non-stop day of free indoor/outdoor family fun with free admission to local museums for all ages, hands-on art making activities for kids and special family-friendly performances throughout the neighborhood. Visitors get in free to participating institutions.
http://www.examiner.com/list/yerba-buena-family-day-is-back-for-its-sixth-year
Posted by Nancy Ewart at 3:40 PM No comments: 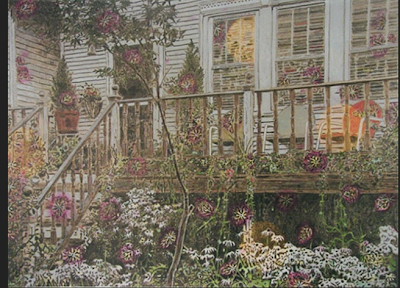 On September 7, 2013, the lower Potrero Hill neighborhood of San Francisco will see an explosion of contemporary art activity as four San Francisco art dealers launch inaugural shows in new gallery spaces on Utah Street and Potrero Avenue, each within a block of 16th Street.

Chased out of downtown San Francisco by rising rents and in the case of Catherine Clark, SFMOMA's construction which impacted access to her space, Brian Gross, Jack Fischer and George Lawson are joining area pioneer Todd Hosfelt who reopened here in 2012. The San Francisco Center for the Book is also located in this district.

More at: http://www.examiner.com/list/the-potrero-hill-art-explosion-sf-s-new-art-district
Posted by Nancy Ewart at 8:20 AM No comments:

Shadravan Gallery: "Dualities" the latest works by former Merritt College Professor and Oakland based artist Kim Thoman. Dualities expresses Thoman’s interest in duality in many forms: body and soul, intellect and intuition, stillness and movement, male and female, the physical world and the unseen, life and death.

Thoman will exhibit 15 pieces from her “Pod Series” and “Venus Series” that trace the major developments in her recent work over the past 5 years. The "Pod Series" paintings juxtapose a wide range of computer-generated pods and painted natural imagery. The pods come in three varieties: an elongated tri-partite form, a twisted shell, and a pointed lozenge with an oval opening. Each of the pods has a skin of digitally applied paint, covering its surface. The "Venus Series" strongly suggests a figure and recalls the Venus of Willendorf, a paleolithic fertility statuette. The landscape is evocative of the desert landscape and reflects Thoman’s experience at an artist’s residency in Taos, New Mexico.

“...Thoman doesn't resolve conflicts, but reveals their superficiality. At heart, everything is in union...” - Renowned art critic, Peter Frank. Full review at www.kimthoman.com/peterfrank.html

Opening night will take place on Friday, September 6 from 5-9pm during the Oakland Art Murmur, the first Friday of the month gallery walk. www.oaklandartmurmur.org

More at: http://www.examiner.com/article/weekend-picks-electric-works-shadravan-gallery-meyerovich-berggruen
Posted by Nancy Ewart at 12:06 PM No comments: 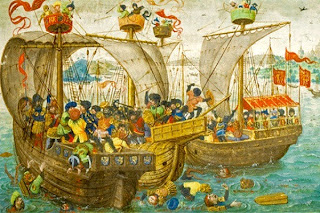 http://www.examiner.com/article/the-getty-exhibits-the-flemish-masterpiece-the-roman-de-gillion-de-trazegnies
Posted by Nancy Ewart at 3:49 PM No comments: