A SHOW IN PETALUMA

I was wandering downtown Petaluma with my friend Jo this weekend and we stopped in to Dimensions Galleria on 115 Petaluma Blvd. North. Two groups of pieces really caught my eye.

First, in the window, were some delightfully funky and whimsical ceramic cars by Jon Gariepy. Inside the gallery, we were also shown a couple of his ominously leaning ships. Both cars and ships are featured on his website; I recommend clicking on the thumbnails.

Then, hanging on the wall were some intriguing pieces that seemed to combine layers of felting or paper on some kind of screen. AHA! It has probably been 15 years since Susan Hersey and I were active together in Artspan/SF Open Studios. I remember her papermaking studio on 18th by where it cuts off of Portola and having a conversation with her about her planned move north. Some of her lamps are also featured at Dimensions. It was very cool to see how she has continued to explore new possibilities within her chosen medium.
Posted by Anonymous at 10:01 PM No comments:

In the 1980s, when I was collecting stamps, it always bugged me that the French could continue to produce amazingly beautiful stamps, a few every year, that showed treasures of French art. They were engraved, the colors were both rich and subtle, and having a page of them was like a poor person's art collection.

Why oh why couldn't the USPS do that? Oh sure you'd get the Cassat or Rockwell now and then, but the production values weren't very good and they never seemed to occupy the space of the stamp as well as the French ones.


Well, I haven' seen them yet except in a magazine and online, but I can't wait to buy a few sheets of these latest stamps. They are for the current first class postage, 44 cents, and the list is interesting: 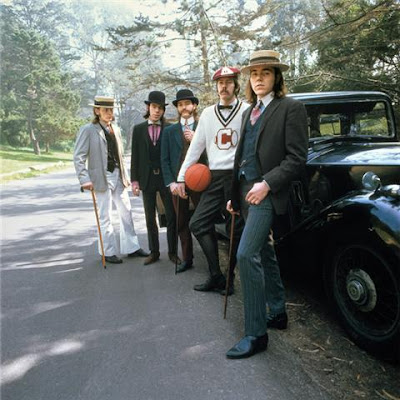 The Charlatans, 1966 @ Herb Green (courtesy MPD)
San Francisco's neighborhoods are full of little known but interesting spaces. To me, one of the more fascinating is the Museum of Performance and Design. Tucked away on the 4th floor of the Veterans Building (401 Van Ness Ave) and in part of the space formerly occupied by SF MOMA (before its move to 4th Street), the current exhibit is of particular interest to those of us who came here in the 60's.

We were drawn by the promise of a new way of living (aka, sex, drugs and Rock and Roll). Rod McKuen's poetry about Stanyan Street became a best seller, almost everybody was drenched in patchouli oil, draped love beads around their necks, believed in free love, thought that we were going to change the world forever -  and listened to the music. The Avalon Ballroom was in its heyday and music promoters like Chet Helms were pioneering psychedelic light shows, the forerunners of today's music videos.

Before rap, before heavy metal, heck before disco, SF's music scene blossomed with bands like The Beau Brummels, The Charlatans, Country Joe and the Fish, and Quicksilver Messenger Service. We could hear Janice singing in funky little dives and Grace Snick was the ice princess for a whole generation of young men (and maybe even a few women). Men wore their hair long, we all got into Indian religion and transcendental meditation, spoke of peace and love even while the Vietnam War was raging. It was sometimes silly, sometimes innocent, certainly naive and it was over far too soon.

Co-curators Melissa Leventon and Alec Palao evoke this rich era using a wealth of rarely seen footage, posters, images, and costume from private and public collections and from the artists themselves. Visitors are able to sample extremely rare audio and video clips, some of them drawn from the important archive of recordings from San Francisco’s KSAN that are now in MPD’s permanent collection.

Just a few of the key original items on display include:

401 Van Ness Ave, 4th Floor
http://www.mpdsf.org/
Thanks to David W. Summer of the Museum of Performance and Design for his invaluable help on this.
dhttp://photographynewsnotes.blogspot.com/
Posted by Nancy Ewart at 4:54 PM No comments: 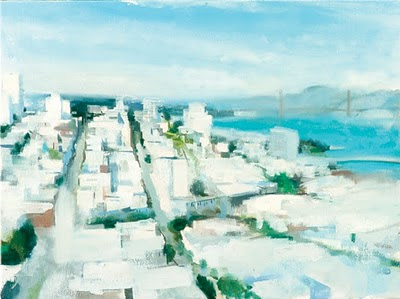 Gage Opdenbrouw, Coit Tower (oil on canvas, used with permission)
If you can't make it to the new Impressionist show at the De Young, don't fret! There's another blockbuster show this weekend at Fort Mason. There's parking at the site (for a minimal cost) and you can lunch at Green's or one of the local food booths. When you get tired of looking at art, come over to the Book Bay, run by the Friends of the SF Public library, and check out their incredible selection of modestly priced books.

For nearly a decade, the city by the bay has been without a major internationally-ranked fine art fair-until now. Avid collectors, art enthusiasts, galleries and the art press eagerly await the long overdue arrival of the San Francisco Fine Art Fair. Over $300 million in art representing 500 artists from 70+ worldwide renowned galleries will be available for viewing and purchase. Attendees can select from the finest collection of 6,000 significant artworks from the 20th and 21st century - focusing on 1950’s to present. Carefully vetted, the fair offers a spectacular selection of paintings, works on paper, drawings, printed editions, photography, and sculpture (both indoors and outdoors.) From the masters to important contemporary offerings, artworks range in price that fit into every collector's budget.

One of my local favorite painters, Gage Opdenbrouw  will be showing his work but there are dozens and dozens of others:
www.engageingart.com
SF Fine Arts Fare: http://www.sffineartfair.com/
Book Bay: http://www.friendssfpl.org/
Posted by Nancy Ewart at 12:40 PM No comments:

I hope nobody minds that this is not Bay Area - wasn't sure how or where else to share this website I just found. Like some of the pieces I've created, it initially reads like an extended joke but is a serious project:
The Stray Shopping Cart Project

What I really enjoyed, as an artist, is how it started as a casual zine spread and grew over time to encompass installations and recreations of settings. His outdoor installation in Long Island City is detailed on flickr and looks like it would have been fun to walk around.
Posted by Anonymous at 1:40 PM 1 comment: 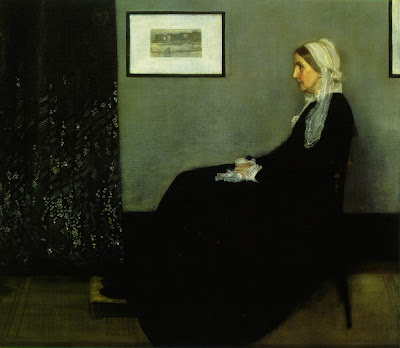 Whistler. Arrangement in Black and Gray (aka The Mother). Seriously, is there anybody in the western world who doesn't know this painting? (@ Musee d'Orsay/used with permission)

Because the Musee D'Orsay in Paris will be closed for renovations and because "our" Dede Wilsey, President of the Board of Directors of the De Young, has the connections and cachet, SF is getting three separate and equally fabulous exhibits, detailing much that is most important in 19th Century French art. The first state of the exhibits opens on Saturday at the De Young. I was able to preview the show yesterday and it really is full of significant pieces. Most importantly, it places the Impressionists and their followers within the context of the academic art of the period.

Another image of the Big Buddha in the Civic Center 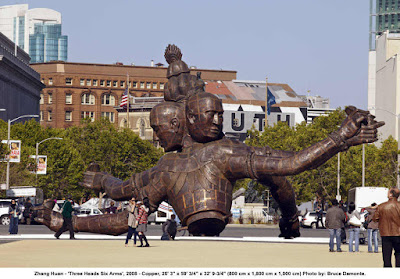 Normally, I'm fairly tolerant of student work. I realize that students don't have that much experience and their work shows it. I realize that this is the time for experimentation. But this show is so bloody bad that I am non-plussed to find anything positive to say about it. 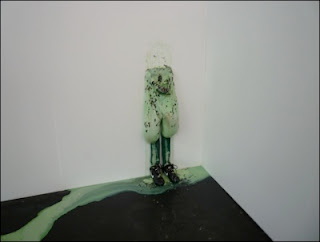 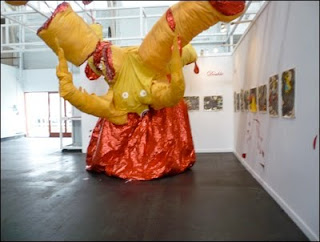 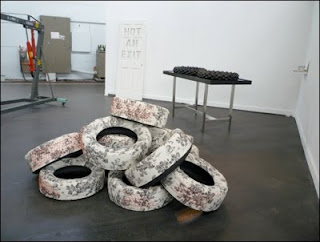 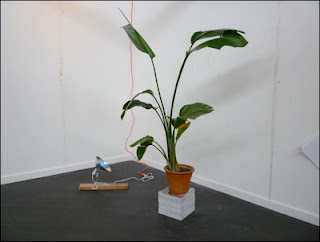 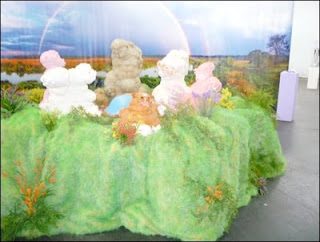 New pieces up at the Examiner.com on the various MFA Shows 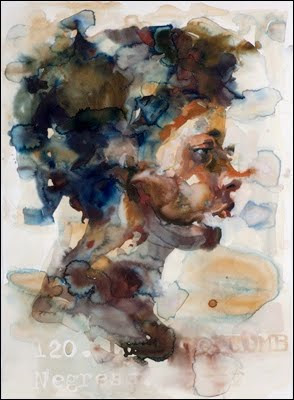 From Monica Lundy's show at Mills College (up until the end of the month)
New pieces up at the Examiner on the various MFA shows.
http://www.examiner.com/x-13996-SF-Museum-Examiner
Posted by Nancy Ewart at 2:23 PM No comments: 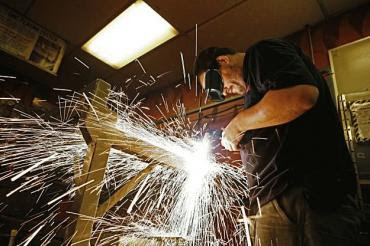 For technical and industrial artists and other creative types whose spectacular ideas never make it past the napkin they were designed on, TechShop seems like a really good idea.

TechShop has been in Menlo Park for a while and has just opened in SF, according to an article today in the San Francisco Chronicle.

Photo by Jessica Pons / The Chronicle

Where are the women at SF MOMA?

New posts up at Chez Namaste Nancy on the continuing lack of representation for women artists at SF MOMA, giant 21 foot robot baby at the Shanghai Expo and an essay on Mierle Laderman Ukeles, one of the generation of feminist artists and performers who is still making provocative work. 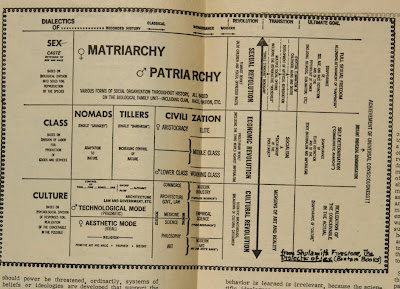 http://cheznamastenancy.blogspot.com/
Posted by Nancy Ewart at 9:30 PM No comments: