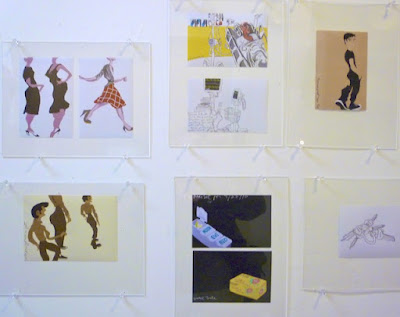 Hugh Buck's iPad drawings (at Developing Environments)
It's getting to the point where I can barely keep up with seeing the the studios of my friends & acquaintances, nevermind seeing someone new. But still, we try.

Last weekend was for artists in the Mission and I visited studios all day Saturday & Sunday. This week (SOMA & Dogpatch) I'm going to try to limit it to the Friday night receptions. I couldn't possibly write about everything I saw, but I'll give you the highlights.

Project Artaud hallway - Dale Erickson's paintings.
My overall impression was that the studios were set up beautifully and the art was better than ever. It looked to me like there were plenty of visitors everywhere I went - I even witnessed two sales. But most of the artists I talked to said it was slower than usual and sales were poor. No surprise, I guess, in this economy - still, artists are enthusiastically making plenty of art. 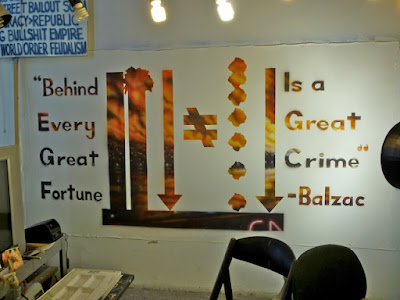 Bernie Rauch is working on a new banner for political actions. He's also finished some new paintings in his multilayered style, including one of Glenn Beck covered in dog (Fox?) shit. 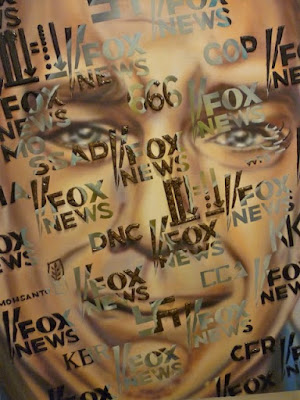 Detail of the acrylic raised surface on Bernie's paintings: 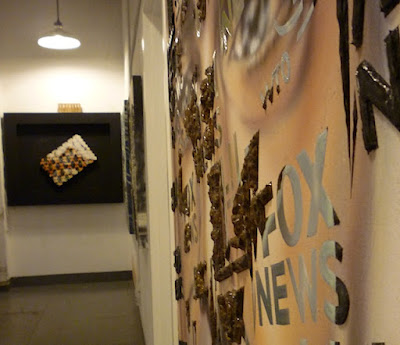 Dale Erickson made a sale while I was there. His paintings filled the studio and spilled out into the halls. In his newest work, he's adding deeper, richer colors and playing with edges. 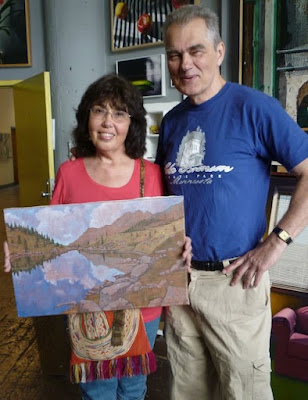 Robert Burg had quite a few new paper constructions, plus a series of drip paintings. 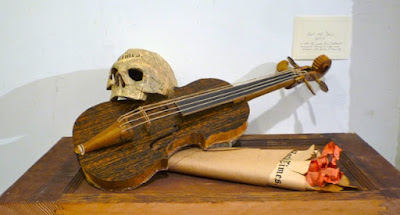 Nartan modeled one of her fashion creations.

Anna Efanova was also making a sale. Her studio was filled with eclectic sculptures, prints, and paintings of mostly surrealistic creatures. 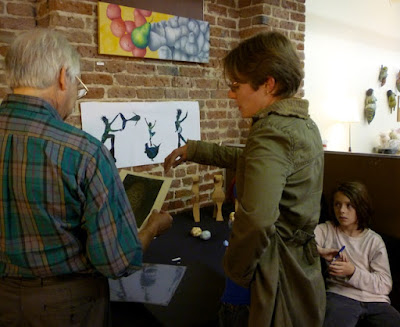 Heather Robinson has a big new body of work, using stitchery in her mixed media panels, with a recurring theme of openings, peepholes, or directed views. The space she shares with a handful of other artists, a little storefront called Secession, was the best looking space I saw this weekend.

It's very attractive, very inviting, filled with interesting things to look at and buy. Everyone was so hospitable, I hated to leave. I've noticed more and more of this kind of art sales space - geared more toward the retail model and less toward the white walls (museum) model. Seems to be working. 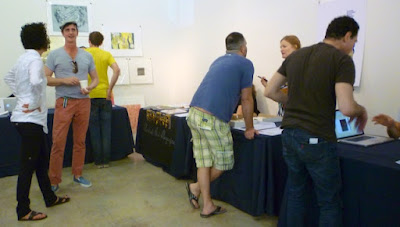 I stopped by the Southern Exposure Gallery for the "Art Publishing Now" fair. Thirty-four publishers, from zines and web-only outfits to established companies like Re/Search and McSweeny's were set up at tables with samples and were willing to talk to artists about ideas, plans and projects. It was pretty exciting - i came away with a ton of samples and even more ideas. 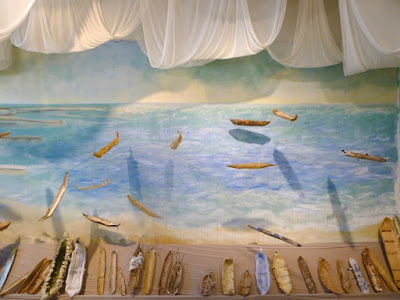 Jennifer Ewing had a brand new installation for her Spirit Boats - she told me this was a kind of trial run for an installation she'll be doing at the de Young in January. She also has a new web site, with a great page about a very special spirit boat and its launching. 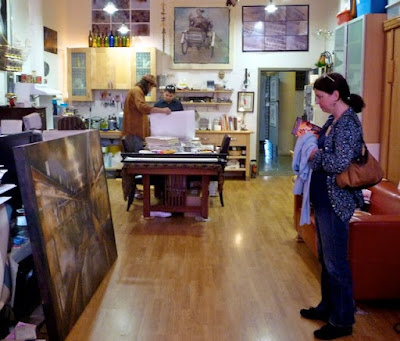 Shawn Ray Harris has expanded his series of 3D anaglyphs (photo-based line images, red/cyan) to include graphic novel styled layouts and narrative. They're really cool looking, and original. I told him they would make a great iPad app, and told him where he could get it made. Then he told me about another artist in his building, Hugh Buck, who has started painting on his iPad and making the printouts at Costco. 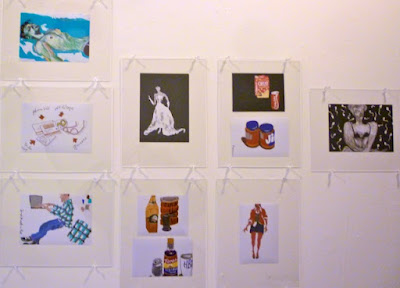 Shawn took me upstairs to see Hugh's work and I was blown away! This guy should be doing covers for the New Yorker. Seriously - wish I had better photos - he doesn't have a web site I can direct you to, either. See if you can pick out the Gavin Newsom caricature. 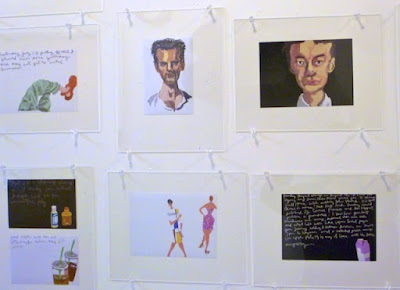 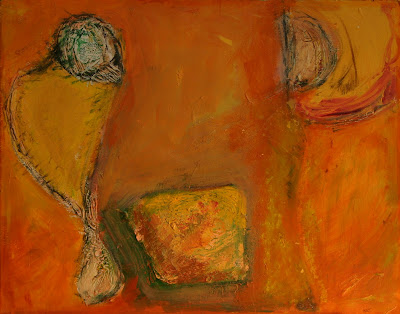 I didn't want to post examples of my work on "the other blog" - right on top of a post about one the gorgeous screens from the upcoming show at the Asian - talk about unfair competition. But since I'm tooting my own horn, here are some more pieces from the inventory. The piece above is titled "Big Dipper." It's about 24 x 36, mixed media on paper and I don't remember the date but it is older.  (Bad Nancy). The image doesn't do justice to the texture or the colors; when I work with acrylics, I seem to feel freer to incorporate raised areas, gold leaf and lots and lots of paint. 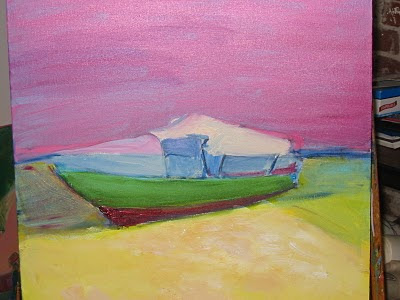 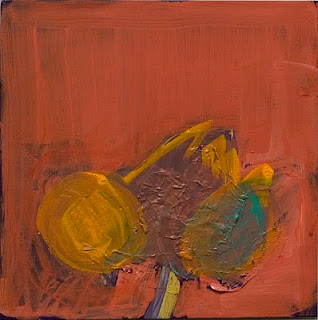 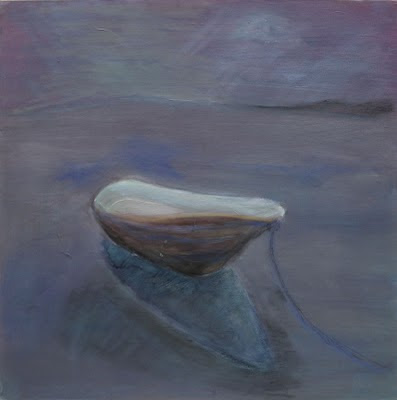 Posted by Nancy Ewart at 7:45 PM No comments: 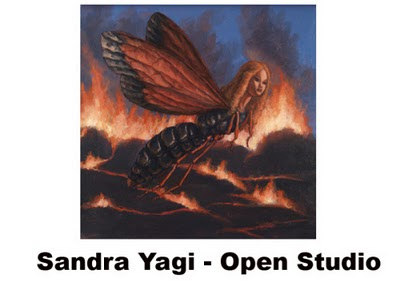 I met Sandy though Anna and have become intrigued by her Gothic visions, part medieval, part post-apocalypse, but always uniquely hers. She brings an impressive level of skill to her work - a rare facility with oil and imagery, a sense of humor and an imaginative vision of unknown worlds that almost, but not quite, seem like ours. It's as if we are a parallel time line to the worlds that Sandy imagines, a different evolutionary track but one which seems quite plausible until you look more closely. With Sandy's work, it's always important to look more closely. 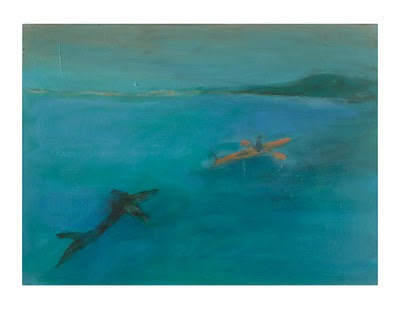