After lunch we decided to visit the new exhibit of Islamic arts. I'm a calligrapher as well as a painter so I'm very interested in that art form. Both the Middle Eastern and the Asian cultures have valued calligraphy as a valuable art form, something that we have lost with the advent of the printing press. The examples they have on display are priceless but (unfortunately), the website is lacking in images of the pieces that I liked the most. They had pages from 12th - 14th century Korans, where the writing must have been done with a single haired brush. Each page probably represented months of work - from the writing, the marbled paper, the gold leaf decorations. I wish that the captions had included translations of the text and maybe some explanation of how Arabic is written. Several of the pieces showed distinctive and different styles and again, I would have loved to have read more about the different styles of calligraphy. As a western calligrapher, I know the difference between medieval Blackletter, Carolingian and Chancery cursive but Arabic writing is not something that I am at all familiar with. In this case, I guess Wikipedia and Google are my friends.

The press release did mention Mohamed Zakariya (American, b. 1942)and when I Googled his name, I found his website with many beautiful examples of his calligraphy. 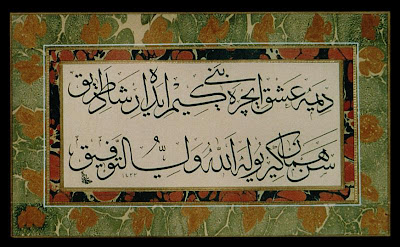 Muhammad, Peace and Blessings Upon Him (Arabic)
The name of the Prophet and his prayer of blessing. This piece appears in the PBS production “Muhammad, The Legacy of a Prophet.”Celi sulus script/Ebru borders and gold division rulings 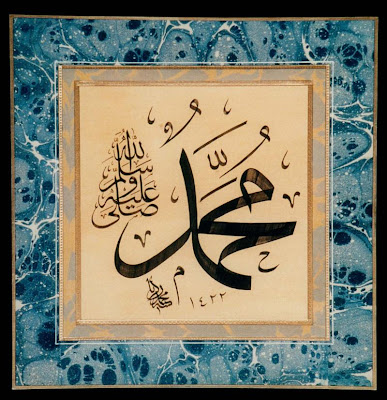 Ottoman Poem 1
“Do not say ‘Who will guide me on the path of love?’ Just get on the road and God gives success.” This poem is a mulemma, an Ottoman poetic form that has Arabic features.
Sulus script