Andy Goldsworthy in the Presidio 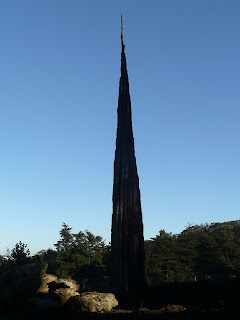 Andy Goldsworthy, British sculptor, photographer, and environmentalist who creates his work from natural and found objects has produced a new piece for San Francisco. Titled “Spire” the sculpture can be found in the Presidio, just inside the Arguello Gate and across the street from Inspiration Point. The work was commissioned by the Presidio Trust and constructed in late October under the direction of Goldsworthy.

I stopped by the site today with artist Anna Conti. It was easy to find the spire. The 37 steel armature supported cypress trees pointed its way to the sky in the clearing before us. 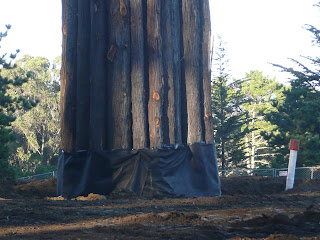 We had to jay walk and then follow a makeshift path through the trees to the sculpture. It stands in the middle of a fenced in area, obviously not finished and open to the public. Surrounded by heavy moving equipment, a large pile of rocks, and upturned soil the work stands as a sentinel, reflecting the majesty of a church spire and the Transamerica Pyramid. As we studied the piece we wondered how it was supported. The Goldsworthy pieces we have seen in the past were all made to be temporary, this seemed intended to be a permanent piece. It wasn’t until I got home and 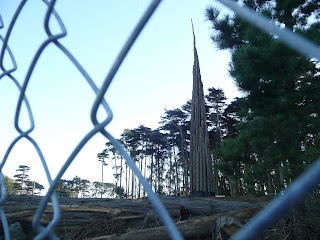 looked up the project on the Internet that I learned the trees were taken from the site (older trees cut down for reforestation), and secured below ground in a metal and concrete base. This will not be a Goldsworthy sculpture that blows away in a thunderstorm!

One of the interesting discoveries in visiting the site was the 40 or so impromptu found wood sculptures surrounding the outside of the fence. I don’t know if Goldsworthy, his assistants, students, or fans of his work created the pieces but they were a wonderful surprise. 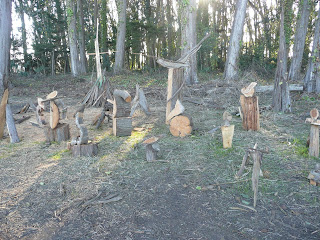 On November 14th an exhibit related to “Spire” opens at the Presidio Officers Club. It contains drawings, photographs, a model of the sculpture, and information bringing more insight into the project. The show is free and runs through May 3, 2009. I don’t know exactly when the sculpture itself will be officially unveiled to the public, but it is scheduled to open after the planting of new trees in the area between now and the end of December.

More information on the show at the Presidio Trust:
http://www.presidio.gov/calendar/spire.htm

I guess we all have Andy on our minds; I'm working on a post on him as well but I'll just post that at my blog and not run the risk of duplication.

If you are saying something different, go for it! Many views on the same exhibit can be interesting.

I've posted my piece on my Chez Namaste blog; I'm not repeating what was said here but I also didn't join in the nearly universal chorus of uncritical praise.

I should add that I really wanted to be impressed. I loved the movie "Rivers and Tides" but what I saw at the Presidio didn't touch me. I don't know how to explain what I felt and maybe my lack of connection to the piece is because it's not finished but it was a very blah experience.

this is one of the least inspired examples of natural I have ever seen... I suppose the Trust considered it "guilt" money to Andy but an equally tall stone structure would have been far more interesting, even mixed media. The "spire", suggesting the holiness of nature right next to the golf course is the most striking irony - perhaps a nice Alexander Calder could still be found?