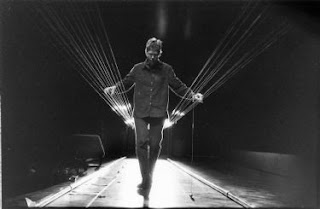 Years ago, when SFMOMA was across the street from City Hall, I toured a mind altering exhibit titled “Tokyo—Then and Now.” Some rooms were dark, with strange arrays of light and electronics. I remember one room was pitch black, with a narrow bridge running diagonally across the electronic neon river that had once been the floor. After my brain exploded, I staggered, neondated and lobotomized, out of the museum onto the street. With bloodshot eyes and squinting from the sunlight, I rolled up my program into a cup and sat on the sidewalk by the exit to the museum. As people came out, I begged and pleaded, “What have I seen? Can you spare an explanation, and a dollar, so I can go back in and retrieve my mind from the audio rental?”

This past Sunday we met friends at the Headlands Center for the Arts, where my brain detonated once again. I had been initiated into the world of Resonant Spaces, performances of electro-acoustic music and electronic sound improvisation by three artists in residence.

On the drive home, I wasn’t sure what I thought of the evening. Being more mature now, instead of begging for an explanation, I made silly and sarcastic comments. Later, I recalled a similar situation in the fourth grade, when I pulled Rebecca Bennett’s pigtails because I couldn’t figure out how to tell her I liked her.

Trying to get to sleep Sunday night, I realized I felt challenged by the performances, since my brain wanted to talk with me about them all night long. As opposed to, say, sleep.

Even though these were sound creating performances, I was left with visual images of the artists more than memory of the sounds they created. The following is a neophyte memoir of the evening. Please visit the web sites of each artist, or discuss with people more familiar with the electronic sound genre, and armed with musical vocabularies, so as to better appreciate these artists and their bodies of work.

Each artist was set up in one of three old Army barracks now housing the Headlands Center for the Arts. The 100+ person crowd moved between the buildings for the one and a half hour performance. 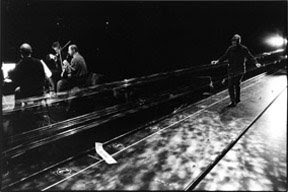 The first venue was in the top floor gymnasium of the first building. The aged walls and worn wooden backboard held the history of basketball games played 50 years ago. Artist Ellen Fullman’s Long String Instrument stretched the length of the room, with acoustic wooden box resonators at one end. It was like a giant 174 string Fender Stratocaster. Numerous lanes, allowing several artist players, separated the many sets of strings, which were c-clamped at different lengths like a capo on a guitar.

Fullman walked slowly and carefully, forward and backward, about half their length, resting, pinching and rubbing her fingers on the strings to create various resonating sounds. Her hand and finger movements were projected onto the gym walls by the two wireless cameras strapped to her wrists. Fullman was accompanied in the first piece by Theresa Wong on cello. The room was still and quiet, except for a brief moment when half the audience jumped out of their skin after someone dropped a metal bottle of water on the floor. For the second piece, Wong and another person played the strings holding curved wood blocks, accompanying Fullman.
(Fullman photos credit: John Fago/Other Minds Festival) 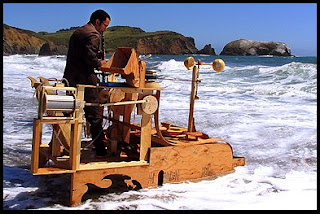 The second artist, Walter Kitundu, had already started his performance by the time we made it to the third floor of the second building. Kitundu is a bird photographer among many other talents. This performance, which I call Acoustic Birdcage Meets Woodworking Ninja Pianist, troubled me. A flock of small birds participated, and were electronically participated upon, while caged at the top of an elaborate wooden musical contraption. I kept thinking, “Didn’t Proposition 2 just pass, guaranteeing renters rights for birds?” A nearby audience member read my mind, and mentioned Prop 2 doesn’t take effect until January 1. It was captivating to watch. Since Kitundu was just awarded a MacArthur Foundation Fellowship, and the birds are probably in the musicians union, it must be ok. 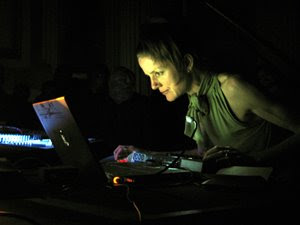 Moving to the third building, speakers surrounded the audience, who in turn surrounded a small table holding a Mac laptop and several small sound engineer boards. When Kaffee Mathews entered, the room was darkened except for a desk lamp by the Mac. The best seats are directly behind Mathews, to better be near the center of all the speakers and watch her screen. From the side, I could see too much of the compact fluorescent light bulb poking out from under the desk lamp shade. I was fascinated as her head bobbed up and down as she moved with the reverberations floating around the room, manipulating the sound equipment with her left hand and clicking the mouse with her right hand, the pointer on various spheres and screens on the Mac. The sounds varied from electronic whale to loose speaker wire, and the door closing tone on the L-Taraval MUNI line. An audience member mentioned “…channeling Pink Floyd,” so I wasn’t alone seeking comparisons.

The evening ended with an incredible dinner downstairs, by Chez Panisse alum Chef Juliette Delventhal, in the barracks style Headlands' Mess Hall. The inexpensive, locally grown & organic food alone is a good reason to become a member and support the Headlands Center for the Arts and their extensive artist in residence program.

This place too seems to be well worth a trip! Thank you for providing this enlightening review. Cheers!