Puryear was born in 1941, the son of a postal employee and an elementary teacher. He originally wanted to be a scientist but earned a Fine Arts degree at the Catholic University of America. After graduating, he joined the Peace Corps and spent time in Sierra Leone where he taught a variety of subjects but also developed a profound respect for the craftsmen that he met. After his two years in the Peace Corps were up, he moved to Sweden and studied at the Swedish Royal Academy of Art. Eventually he returned to the US and earned a Masters of Fine Arts at Yale in 1971. All of this varied experience eventually led to his accomplished handling of natural (and some not-exactly natural materials) as well as his approach to sculpture with roots in Scandinavian Design, Minimalism and African Art. 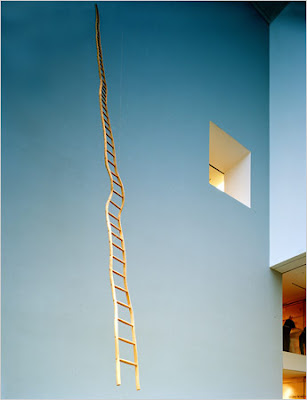 “Though he would be the last to deny that in past years the art world, like most things American, has been disfigured by racism, Puryear does not find his own blackness an impediment. "Right from the start, I thought, No one can keep me from being an artist." He speaks of feeling the inaccessibility of Africa. "There is an incredible pain," he says, "that we black people feel at not being able to reach back and touch the country of origin the way that every other hyphenated American can and does. Being there made me realize how inescapably American I was—not African. You know you must embrace your identity as an American, not wallow in the idea that you're some kind of displaced, tribal person. Here you have responsibilities to your Americanness as well as your blackness."” 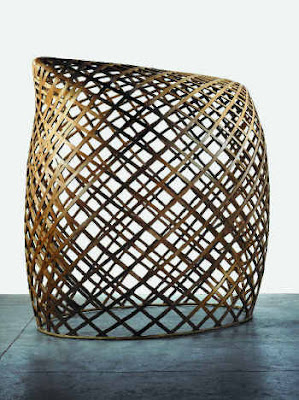 Robert Hughes wrote that Puryer is “A master of both modernism and traditional crafts, he creates sculptures that are a synthesis of beauty but free of cliché.” I couldn’t agree more (not that I’m tempted to disagree with Robert Hughes, the doyen of art criticism and my personal idol. Puryer’s work is well displayed at SF MOMA. For once, the museum has given a traveling show enough room for the pieces to breathe and claim their psychic space. Each piece shows a respect for the craft and the skill to use materials as diverse as various woods, leather, brush, carvings, tar, wire and mud. 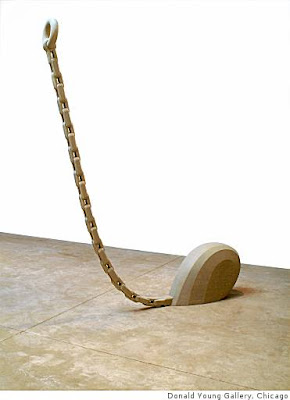 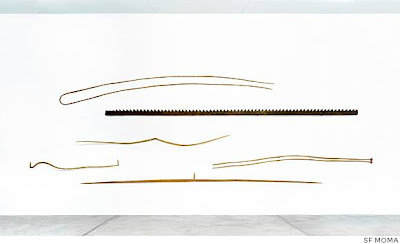 “Puryear has always been troubled by the art/craft division in American culture. "At bottom it's a class issue really," he says. "‘Art' means thought; ‘craft' means manual work." But it's never so simple, for craft means thinking with (not just about) material. "In Japan you'll never see that kind of snobbery; potters and carpenters are honored there as living national treasures." (review by Robert Hughes, Time On Line Archive). . As one who loves science fiction and the creation of imaginary worlds, I couldn’t help but think that some of these beautiful objects could have come from alien Amish-farmer folk from one of the 28 new planets discovered outside our solar system. He combines organic, biomorphic shapes with those what hint at something more familiar but are unfamiliar enough to puzzle and engage you. I found myself looking and then, looking again at work that's serenely beautiful but not boring, exquisitely crafted but showing the hand of the maker.

Whoa that first picture is really great! More from that please ;)

You know, I got images from so many sources that I don't remember where that particular one came from - maybe his show at MOMA? The SFMOMA website doesn't have good images and my camera skills are not adequate for this work. That particular piece is suspended from the first floor gallery and hangs over the entrance space. It's not as well displayed as it should be because there's a lot of visual clutter around it but even so, that ladder is one of his masterpieces.

I found the source of that image - from the NY Tmes review of his show:
the photographer was:
Richard Barnes/Museum of Modern Art

Check out the Art 21 site for a whole series of excellent videos.

Very nice writeup. Makes me actually want to go to that miserable museum.