Bill Martin, whose paintings combined “surrealism and 19th century American landscape painting” (Kenneth Baker, SF Chron) passed away on October 28th from complications of lymphoma. I took a class from him ages ago and wish that I could have taken more. Our styles could not have been more different but he was a gentle man and a great teacher.

The painter, a full-bearded, 6-foot-5-inch redhead, told Baker that one of his formative experiences was seeing a landscape by the Hudson River School painter Frederic Church at San Francisco's M.H. de Young Memorial Museum. Dazzled by Church's depiction of light, Mr. Martin decided then and there he wanted to paint like that.
Born in South San Francisco, Mr. Martin got his bachelor's and master's of fine arts at the San Francisco Art Institute. Over the years, he taught at the Art Institute, UC Berkeley, San Jose State University and College of the Redwoods. In recent years, he taught a weekly figure-drawing class at the Mendocino Arts Center.

Mr. Martin was a beekeeper and avid player of the Chinese game Go. He loved to paint the coastal flora of Mendocino and the dramatic landscape he saw from the window of his home on the headlands overlooking the Pacific Ocean. He usually painted on round or semicircular canvases, which he felt gave the viewer a greater depth of view. His work was shown at museums around the country and abroad, including the Museum of Modern Art and the Guggenheim in New York, the Art Institute of Chicago and the San Francisco Museum of Modern Art. Among other places, his paintings can be found in the collection of the Oakland Museum and at San Francisco International Airport. (from the obit at SF Gate - link below) 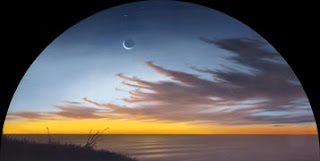 "There seem to be two distinct but compatible directions in my art. The first is concerned with the depiction of imagined realities. The other is the depiction of perceived realities. By observing the existing subjects I am drawn to paint, I find new underlying currents in my own subconscious. Thus in my art I explore the conscious, subconscious, and the intercommunication between."

~ from an interview in the introduction to "Lost Legends"

Mr. Martin published three books: "Paintings 1969-1979," "The Joy of Drawing" and "Lost Legends." In recent years, his son said, he concentrated on paintings based in nature but dealing with metaphysical notions of mortality and "the life after life."