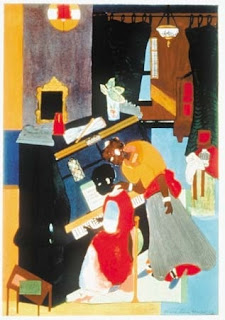 The collection, put together by a African-American couple of modest means, was built over a lifetime of collecting. Vivian and John Hewitt were married in 1949 and began collecting immediately. They used wedding gift money to buy art on their honeymoon and never stopped throughout their married life.

"Art enriches life, enlarges life, expands life," says Vivian Hewlett and this somewhat small but comprehensive exhibit is an eloquent testament to that belief. Located on the third floor of the museum, the exhibit features 54 works assembled over a half-century, from 1949 to 1998, and offers not only important twentieth-century art but also a survey of African-American culture and society.

The exhibit includes works by Romare Bearden, regarded as one of the greatest American artists of his generation, and Henry Ossawa Tanner, one of the first African-American artists to achieve acclaim in both America and Europe. Contemporary artists are also represented, among them Jonathan Green, a 1980s graduate of the School of the Art Institute of Chicago. The works by Tanner are not first rate, in my opinion. There are three pieces and while they round off the collection in a historical sense, they don't add much artistically.

Romare Beaden is represented by several juicy color lithographs and collages. It was a real pleasure to be able to get up close and see how his collages fitted together like the most intricate puzzle. "Jamming at the Savoy" (1988) sings like a jazz riff with light and dark shimmering in the piece. The sole Jacob Lawrence piece, "Playing Records" captures the essence of hipster cool.

Ann Tanksley (b. 1934) was one of the artists that I was completely unfamiliar with and I found her work completely captivating. Her palate glows with color. Her simplified forms are influenced by the Mexican Muralists but her palate is pure Matisse. 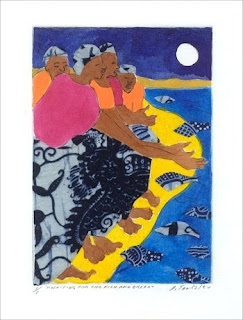 This is an intimate collection of small- to medium-size pieces that could be displayed in an average size house. Taken as a whole, they show a wide range of artistic responses to African American life in the last 50 years. There are some pieces which reflect the grimmer aspects of that experience but the but the emphasis is on joy and the resilience of the human spirit. I couldn't help thinking of Timothy Buckwalter's recent comment when he was able to see the Fisher Collection. According to him, the collection could have come out of any art magazine of the 70's and didn't have much of a personal focus beyond testosterone. The Hewett's collection is the antithesis of that - the life time's labor of love for two people who loved art and were intimately involved in the vibrant African-American artistic culture of the last 50 years.

There has been a series of gallery talks on Wednesday; the remaining ones are:
Nov. 26: Classical African Sculpture and Cubism
Dec. 3: The Voice of Jazz as Artistic Muse
Jan. 7: African American Art Not Mainstream? Don't Hold Your Breath Waiting!

The Museum of the African Diaspora is located at 685 Mission Street at Third Street in San Francisco. Museum hours are 11 a.m. – 6 p.m. Wednesday, Thursday, Friday, Saturday (closed Monday & Tuesday) and Noon – 5 p.m. Sunday. Admission is $10 for adults and $5 for students and seniors. For more information, details on gallery talks and a map of the area, visit www.moadsf.org or call (415) 358-7200.
Posted by Nancy Ewart at 11:41 PM