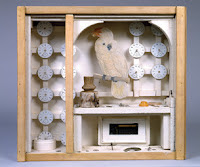 This is from Timothy Buckwalter's blog, dated Oct.26, 2007, and used with permission:

Two days ago at the annual SFMOMA press luncheon Neal Benezra began by saying that with the three current exhibitions the Museum was looking the best it ever had. I posted in agreement and promised more on this.

Absolutely, the three shows are fabulous (Eliasson being the weakest of the bunch), and seemingly related to each other - a lot more on this in a second. But I would also say, that the presentation of the permanent collection is still really lacking. Lacking? Yes, lacking. Where are the California artists? Outside of NYC San Fran has the biggest school of AbEx on the globe, many of the artists were on the caliber of the East Coasters. What about Wally Hedrick and his friends - amazing work done in the Bay Area. How about something from our Northern California's greatest living artist Bruce Conner? Okay, occasionally SFMOMA puts up a Conner. At least BAM had the foresight to purchase Conner's punk photo series.... And on I could go, instead here's a little something about the three new shows:

Currently, SFMOMA is offering retrospectives of American sculptor Joseph Cornell, Canadian photographer Jeff Wall and Icelandic multi-media artist Olafur Eliasson - three exhibitions that, looked at together, create an amazing art experience spotlighting themes and ideas that were carried out through much of the 20th Century.

Cornell met Surrealism back in the 1930s, Wall hit his stride in the 1990, and Eliasson has come to prominence in the last ten years.

The best place to start is with Cornell, because much of the dialogue and ideas that he helped propagate can be found in the works of the other two. Joseph Cornell: Navigating the Imagination is the first survey of his work in more than a quarter-century. It was added to SFMOMA’s docket at the last moment, and the Bay Area is fortunate to have such a gem for a time. Born in 1903, Cornell was a self-taught artist who lived with his mother and brother in Flushing for most of his life. Early on he became a pack rat, trawling lower Manhattan for knick-knacks, books and movie memorabilia. He befriended many and worked with some of the European Surrealists who were exiled to America at mid-century.

Cornell had an obsessive personality, and with it he did wonders, creating hundreds of shadowbox sculptures. Using old watch faces, snippets of Victorian-era postcards, stuffed birds from Woolworth’s, wire and other bric-a-brac, Cornell created a self-contained enigmatic narratives in shoebox-sized wooden boxes. Whether a reflection of sweeping natural vistas or an homage to a movie star that Cornell adored each box gives off the heated glow of a romantic wrestling with the increasing homogeneity of his era. There may never be more of a master of the found object than Joseph Cornell.

With Olafur Eliasson, it is as if Cornell’s boxes have come to life, allowing a viewer entry to his strange worlds. Eliasson uses loads of low-tech gadgets – colored Plexiglas, mirrors and motion sensors -- to create room-sized environments that offer fun house quality experiences that challenge the viewer’s spatial and visual perception. They’re fun, but without as much heart as Cornell.

Jeff Wall’s large photographs maintain Cornell’s ability to collage seemingly disparate objects into densely-considered narrative. Many of the pictures are montages of multiple images that create a new story, often as enigmatic and rich as Cornell’s sculpture.