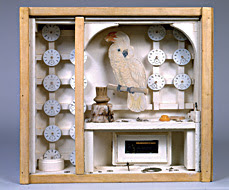 I’m a big fan of Cornell. Up until this show, I’ve seen very little of his work in person. SFMOMA has several pieces in their permanent collection but they are only occasionally on display. From now until January 6th you can immerse yourself in Cornell’s world right in your own backyard.

When approaching the exhibit by stairs the first thing one sees on the 3rd floor is three interesting photographs: the family house in which Cornell spent all of his adult life located in Flushing, New York (he worked in the basement studio), a photo of a very gaunt looking Cornell working in his studio, and Cornell’s collections of objects, boxed and labeled. The photos are intriguing. They add to the mystery of Cornell’s art. Every time I look at this exhibit I find myself spending a lot of time with these photographs.

Cornell began his art career by creating collages. Interestingly I’ve read that he was so meticulous with his work that he never overlapped images but instead cut and fitted the collage pieces together. Cornell began working with commercially made boxes until 1936 when he learned to make his own.

The show is nicely curated. The first gallery you step into is called “Navigating a Career 1931-1971” which gives one an overview of Cornell’s work. The viewer sees boxes and collages representing Cornell’s many themes. My favorite display in this room is the glass case containing Cornell’s art materials. This is an interesting collection of paints, brushes, tools, jars, cylinders, pipes and other things. It gives some clues into the artist’s process. The other galleries are arranged according to theme, such as “Geographies of the Heavens” and “Nature’s Theatre”. Cornell is often associated with the Surrealist movement but was never an official member. He was friends with artists such as Marcel Duchamp and Max Ernst. Their influence is clearly seen as you visit the galleries.

Cornell’s boxes are little worlds unto themselves. Cornell didn’t venture outside New York but he was an avid armchair traveler. I like to picture him in his little boxlike basement traveling to other places in his mind and recreating those worlds in his boxes.

As you look at Cornell’s work consider themes of time, female celebrities, metaphysics, nature, the cosmos, birds, games, toys, hotels, palaces, and spirituality. Look at his materials and colors. The color blue is seen repeatedly and is also painted on the gallery walls. Ask yourself, “What do these objects mean and how are these objects related?”

Some of the personal appeal of this show is that many of Cornell’s works remind me of my trips to the “Bargain Basement” in the Chicago area as a young girl. It was a consignment shop often selling pieces of furniture with all their original contents. While my mother and grandmother shopped I’d station myself in front of a dresser and start rummaging through someone’s life. Cornell’s work carries that sort of curiosity. The boxes have drawers that if not left open for us to peer into, tantalize the imagination.

One of my favorite pieces “Cabinet of Natural History: Object, 1934, 1936-40” is a chest full of labeled corked vials filled with various objects. Only some of the labels are visible, such as “Photographie” and “Mirage”. We are left to wonder how these titles relate to the content of the vial. This piece and others are based on curio cabinets, containing mementos from travels usually displayed in living rooms and popular in the early 20th century.

I can’t say enough about this show but also I don’t want to give away all its secrets. Perhaps you’ll see me there, gazing intently at one of the “Soap Bubble Sets” or bird aviaries, contemplating the mysteries of the universe and how it feels to be a bird trapped in a cage, or perhaps an artist who only needs his imagination to travel the infinite abyss of the mind.

Image borrowed from www.sfmoma.org
Posted by Pamela Heyda at 8:23 AM