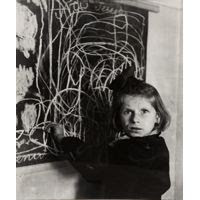 Today as more photojournalism finds its way into museums, we have an opportunity to study the imagery of some of the hardest working photographers the industry has ever known.

Being able to stand before a well made print of an image of the war-torn Balkans, or laborers in a gold mine in Brazil or an orphaned child in front of a black board, hopelessly lost in the twisting lines of a scribbled drawing, allows us to get beyond the captions and text of reporters and newspaper and magazine editors, and look into the hearts and honestly through the eyes of the photojournalist.

Through such exhibitions we are touched by the photographer's dedication to craft, his or her social sensibility, and determination to tell the truth. What we are seeing is far beyond the "news-worthiness" of the imagery. We are experiencing moments instinctively, artfully, frozen in time, that communicate the often sad reality of the world we live in.

The current exhibition of the photography of David Seymour at the de Young Museum in San Francisco is no exception. In fact Seymour's work makes a significant contribution to the definition of photojournalism as art. 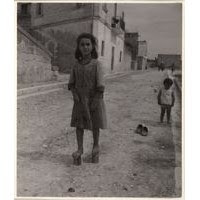 Seymour was born David Szymin in Poland in 1911. As a young man he studied graphic design in France where he received his famous nickname Chim. Friends found his last name too difficult to pronounce. Later when he changed his name to Seymour he made no effort to discourage the use of the nickname. He began work as a photojournalist in 1933 and earned a reputation during the Spanish Civil War. He served in the US army during WWII and became a US citizen in 1942. It was in 1947 that along with Robert Capa, Henri Cartier-Bresson and George Roger he co-founded Magnum Photos. He died in 1956 while covering the Suez War.

Upon first view one might think Seymour's photographs unremarkable. But for most, certain of his images stick in the mind and compel one to step back for another look.

Seymour depicted suffering with a great respect for the subjects he chose. He often focused on children, the very individuals who often suffer the greatest losses, but who also have the greatest resilience and capacity to survive. Some have called his work sentimental. But when one sees Tereska, a Child in a Residence for Disturbed Children, Poland, 1948 and Children at Play, Luciana, Italy, 1948, it's easy to understand that Seymour was only telling the truth. He shows the suffering and the damage as well as the determination to overcome.

The exhibition at the deYoung is small and for this reason, I suspect, it was installed in a dim passage way between two features of the permanent collection. It deserves better. Still, this is a rare opportunity to see the work of one of Magnum's founders and a photographer who helped define photojournalism at its birth.

All photos by David Seymour from www.thinker.com
Posted by David W. Sumner at 11:29 AM

Dear David,
Thanks for your thoughtful comments about the Chim show. As Chim's nephew (and the donor of the photos), it is wonderful to read that the show was so warmly received. Sincerely... Ben Shneiderman