Louise Nevelson at the de Young

San Francisco has had a couple of Nevelson sculptures in public spaces for several years, both of them Corten Steel, painted black: "Sky Tree" (1977), located at the Embarcadero Three in the Financial District, and "Ocean Gate" (1982), on view at the de Young’s Sculpture Garden (previously at the Legion of Honor.) 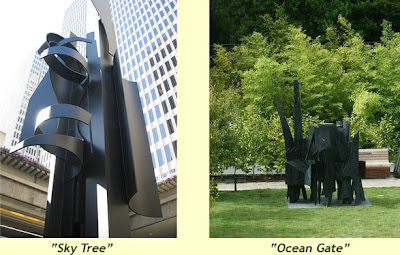 The Hackett-Freedman gallery in downtown SF had a show of Nevelson's work in 2004, including several of the large wall reliefs and mixed media collages, as well as some very early figurative sculptures.

But seeing the retrospective that just opened at the de Young made me finally comprehend her work. After passing through the first three rooms, I started thinking that she was more focused on line than form. And then I came to the room with her works on paper, where a big wall plaque has this quote from the artist:

"I have never left two dimensions, because I've always been doing etching and lithographs and drawing . . . If you really go through just one piece of mine, you can see drawing."

The first room (her earliest work) is mostly figurative pieces, including a row of rock-like terracotta forms that are scribed with faces and petroglyph symbols. (Right: "Moving-Static Moving Figure", Terracotta, 1945, from the Whitney)

The next, and darkest, room contains the Moon series and the Sky Cathedral. The dim light is a silvery blue that gives the black wood sculptures a graphite sheen and enhances the edge views.

The viewer then enters a bright room full of all-white sculptures, "Dawn's Wedding Feast" with bride, groom, and cathedral sculptures. This group was reassembled with loans from more than a dozen locations.

The huge, black, stacked-boxes sculpture, "Homage to 6,000,000 I" (1964), a loan from the Osaka City Museum of Modern Art in Japan, requires multiple looks. It's almost too big to take in from one viewpoint. It reminded me of an Irving Norman painting: the use of multiples, in which I could see machinery, bombs, bullets, bodies, and barriers. 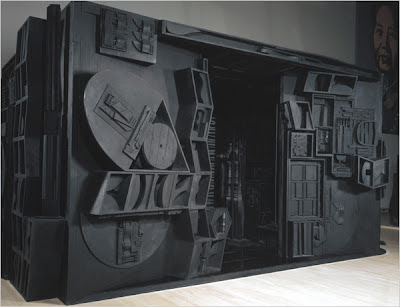 (Above: "Mrs. N's Palace", from the NYT)
Two free-standing dwellings sat next to each other. One, a small, porous, gingerbread "Dream House" . . . the other a life-sized, luxury cottage called "Mrs. N's Palace." Apparently, she worked on the "palace" for thirteen years.

The wooden sculptures are made from multiple pieces of wood, all different sizes and shapes, stacked and pressed together to create an overall shape. The monochromatic paint covering the pieces forces the eye to follow the lines within the forms. She was drawing with wood.

My favorite review of the show, from its previous life in New York: link
Posted by Anna L. Conti at 8:12 PM

I'll never forget a film that I saw on her in class. She was dressed to the nines and was directing several studio assistants on how she wanted a huge sculpture placed. "A little more to the left, darling. No, a little more to the right." And so on; those assistants earned their salary. She was quite a character but I suspect that the facade was developed both to protect the woman within and to make her art more salable. There's a good bio out on her which I highly recommend - I can't remember the title but I think there is only one.

I couldn't believe Kenneth Baker's review, opening by complaining that all she wanted to talk about was herself and her work!
I thought this kind of kneejerk sexism was dead and buried, at least locally. Would he have ever had such a negative reaction to a Picasso, Rauschenberg, Warhol, etc in the fullness of their mature careers wanting to talk about their work instead of asking a critic about...whatever... ???

As an art critic, Baker leaves me cold. This is not the first time I've read some comment by him that had me doing a slow burn. For instance, I think that his review of Ruth Asawa's show at the De Young was patronizing (to say the least). I remember reading his review of a show of American Indian Women artists - maybe 15 years ago - which was borderline racist and certainly clueless about tradition, materials and culture. At the same time, he waxed enthusiastic about a some in some South of Market St. gallery that was composed of mirrors, smudge pots and (I think) a floor full of gravel or something along those lines. If you want to read good criticism about Bay Area artists, find the book by Thomas Albright, the late and much missed art critic for the SF papers back in their glory days.