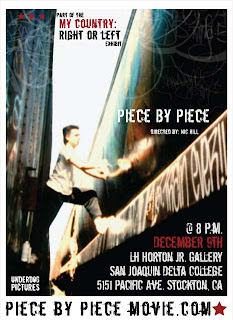 From Dimitri Hagnere at the SJ Mercury News:

Nic Hill has captured the world that inspired Jeloe and hundreds of other graffiti artists in the film "Piece by Piece," part of KQED's "Truly CA" series of independent documentaries that showcase the Golden State. The documentary delves into the history of graffiti art and profiles the people who lived it.

Like the city itself, San Francisco street art has transformed a lot over the last 25 years. Between 1993 and 2000, people from all over the world flocked to the city to do graffiti; the scene they found was already in full bloom. Local stylists like Jeloe became internationally known for their diversity and unique flare.

But things have changed. Harsh penalties keep all but the heaviest risk takers off the streets and rooftops. The graffiti art scene is not what it once was and its practitioners say it will never be that again.

The documentary is especially valuable in capturing the inherently temporary nature of illegal graffiti. Because their work is often removed or painted over, many artists photograph it. Gathering a comprehensive collection for public viewing requires the right connections -- connections Hill fostered through his own years in the world of graffiti art.

"Graffiti was sort of a stepping stone for me," he said. "I got into filmmaking from there. It's all about channeling creativity. There's a similar connection."

According to Hill and street artists like Jeloe, San Francisco Mayor Gavin Newsom's zero tolerance position on graffiti has driven a lot of talented artists out of town. And while new graffiti emerges almost every night, it's painted over nearly as quickly.

"The entire N Judah tunnel used to be covered with burners; it was like a preserved art gallery in there," Hill said. "But about a year ago, the city painted over everything; and now anytime someone gets up, it gets covered up right away."

More of the story, with quotes from taggers and city officials, HERE

Nic Hill graduated from the University of San Francisco's Media/Film Studies program, where he studied communication/media theory and documentary filmmaking. He was an assistant producer on various short films for San Francisco director Melinda Stone. His 2003 short film Diet took Best in Show at the Mira Costa DV Festival in San Diego. He currently lives and works in San Francisco as a director and editor, and is directing a feature length documentary about Wikipedia.

Email ThisBlogThis!Share to TwitterShare to FacebookShare to Pinterest
Labels: http://www.blogger.com/img/gl.link.gif