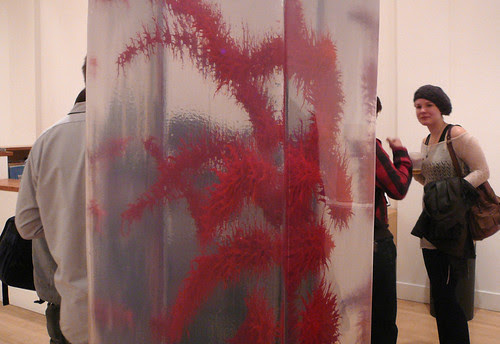 I saw a couple of shows last night during "First Thursday" illustrating the divergent outcomes when two different artists work with layered plastics. 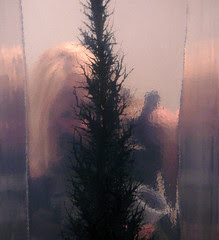 Dustin Yellin, at the Haines, layers synthetic resin, acrylics and inks to create the illusion of organic sculptural forms. At first glance, the clear boxes seem to be filled with sea creatures suspended in solution, along the lines of Damian Hirst's shark. But closer inspection reveals that the forms are dozens of tiny flat paintings on clear resin surfaces, each one about 1/8 inch from the surface below it. From the front or back, the 3D effect is complete. From either side, the slices of resin are apparent and the form disappears. Even the boxes themselves seem organic - with slightly wavy edges, they seem to be impersonating aquariums.

Eric Zammitt's layered plastic constructions, at Scott Richards, are machined into precise shapes and geometric patterns. The colored plastic strips are cut and fused with clear plastic spacers into mind-blowing patterns that are mathematically precise and at the same time shifting, flowing and vibrating. They seemed like the corporeal manifestation of one of Chris Ashley's html pieces. Some are mounted on the wall as paintings, others are placed on pedestals, to be viewed from all angles.

Both artists express the bit rate nature of reality, that comes to us in discrete packets of time yet seems to flow smoothly and unceasingly.