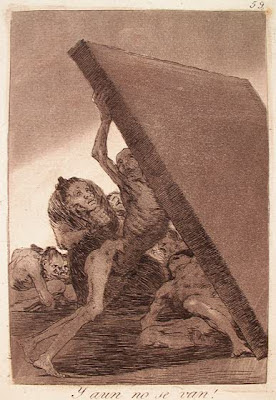 I saw three print exhibits at the San Jose Museum of Art last weekend - work by Picasso, Goya and Miró. The less said about the Picasso and Miró works, the better, but luckily the Goya show is worth the price of admission.

The complete "Los Caprichos" printed in 1799, is a series of 80 etchings and aquatints satirizing the foibles of humanity. Francisco de Goya was referring to his time and place, late-eighteenth-century Spain, but most of his observations still hold true today. They weren't terribly popular images when he made them, and Goya apparently had some difficulty getting them exhibited:

"An early draft by Goya of an advertisement for the series shows that he was proposing to sell them through a bookseller; he must have been unable to find anyone interested in the project and was forced to put them on sale in the shop below his apartment, surrounded by bottles of liqueurs and perfumes." (via)

The prints are small, about 6" x 8", but in sparkling condition. Every scratch and smudge on the plate is clearly visible on the paper, with rich blacks next to brilliant whites and the evident hand of the artist in the lines and hatches that bring his cast of characters to life. Goya's gripes about the government, the church, the schools, medical care, and popular culture are still relevant, but in some cases, the contemporary viewer needs a little hint to get past arcane symbolism.

The exhibitor has used an interesting triple-play wall-tag strategy. Each print is accompanied by a wall plate that gives three views, commentaries, or interpretations of the image. Two of the commentaries are from Goya's time and the third is by Robert Flynn Johnson, curator of this show.

The show was organized by Landau Traveling Exhibitions and has been making its way around the country. It just arrived in San Jose - will be in there until April 20th. You can download the audio tour (free) from the web and listen to it before, during or after show. Bring your reading glasses - if you use them, you'll definitely need them here.

(And, HEY - if you're in California, get out there and VOTE today!) 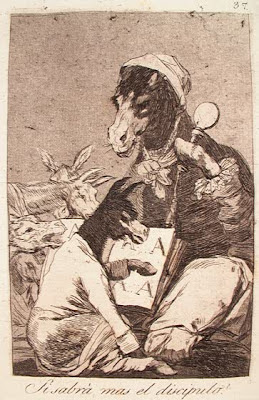 Images from top to bottom are: "And Still They Don't Go", "All will Fall", "Here Comes the Bogey Man", "Might Not The Pupil Know More?" from various public domain sources.
Posted by Anna L. Conti at 9:03 AM