Gilbert and George at de Young 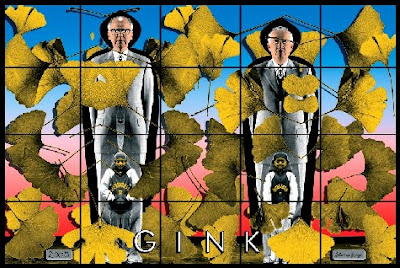 From L7 at Glittering Generalities:

It is possible to know too much about the inner workings of complete strangers. You don't even have to read the results of their online psychology tests.

Yesterday I had planned to go to a big wine tasting event in San Francisco with L. the Lively, who is in town for a few days. I ended up kicking myself for not buying advance tickets, and it got sold out, so we went to the de Young instead, ponying up the five extra bucks to see the Gilbert and George show. (I had never heard of Gilbert and George. The cashier got a little cranky when I asked if it were crowded in order to decide whether or not we wanted to see the exhibit. I don't like crowds. I'd already decided how much I hate people when we stopped at the gift shop on the way in.)

Oh my God. At first, I was just a little bored by the endless images of Gilbert and George, who were clearly their own favorite subjects. Then I was annoyed by a piece that could have been scrawled on the wall of the men's bathroom of any Greyhound bus station (a rough drawing of a big dick next to an open-mouthed face with the word "Suck!" underneath). That kind of thing always does annoy me. I am not shocked, I am just irritated, the irritation accompanied by a lack of interest that is off the charts.

But none of that prepared me for the huge images of penis-shaped turds. Guess what was next to the pillars of penis-shaped turds? Naked images of Gilbert and George. Full frontal, baby. Also, Gilbert and George presenting their rears, looking back over their shoulders, and either tugging down their tighty-whities or experimentally sticking their own fingers up in there, I couldn't quite tell which and had an extreme disinclination to make a close examination.

As we are on so many topics, L. and I were of like mind and exited posthaste. On our speedy exit, the security guard and I had a chat. (You know I like me a museum security guard if he be a big hunk of a man.)

Even though I'm not completely sorry we went (we did see some John Singer Sargent paintings I really liked, and some by Diego Rivera, and some great chairs), all in all, I'd rather go winetasting.

P.S. I forgot to say that Gilbert and George were there in person, signing copies of their books and other merchandising paraphernalia. The line was a mile long! (Figuratively speaking. But it was long.) L. and I could not believe it. We peeked in to see G & G, and they were two elderly balding men in spectacles and beige suits. They were sitting at this table in this vast empty room. The people waiting to get autographs were mostly young hipstery-looking folk. Who, one supposes, like to look at XXXXXXXL penis-shaped turds?

Email ThisBlogThis!Share to TwitterShare to FacebookShare to Pinterest
Labels: http://www.blogger.com/img/gl.link.gif

LOL! I saw an exhibit of their "work" many years ago in London and decided that was enough. To me, they are overpriced, overhyped and (alas), over here. But their career certainly shows what you can do with you are absolutely shameless about promoting yourself(ves?) and have a media that's willing to play along.