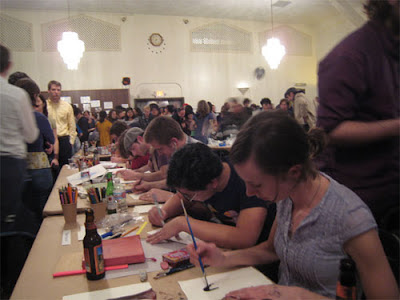 Woah. I thought having worked this gig last year I’d somehow be immune to the intensity of this environment. Although I was a little more relaxed, there is nothing like being immersed in this storm. It’s fun and frightening at the same time sort of like a roller-coaster ride but more my speed. I did a little pre-drawing before which helped a lot. I was able to get two drawings done. Thanks to Mary who was kind enough to brave the crowd and snap some cool pics.

I met David from Brazil, who collects mostly Brazilian artists, who was able to snag both of my drawings by using, as he described it, “teamwork.” He said my work has parallels with contemporary Brazilian art and I can see that. I wish I had thought to have a pic of him and me together. Ah well.

I sat next to my pal Martha Sue Harris. I think it’s a lot easier to sit with a buddy… 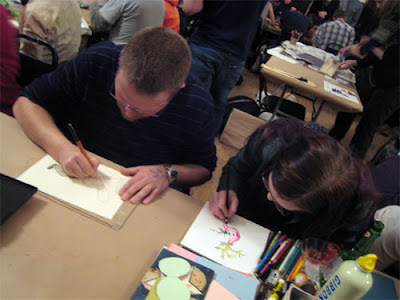 I tried to do this, poked my nose in the door and immediately retreated because of the noise. You are a braver woman than I am!