I'm running out of time for posting this week, so I'm going to make these really quick. Luckily, they're all from Project Artaud, which held Open Studios last week . . . 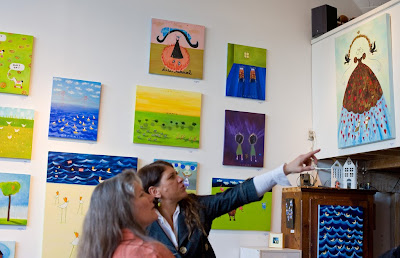 photo © Marianna Whang, 2009 All rights Reserved
Carrie Nardello paints funny, piquant, dazzling images of (mostly) animals doing outrageous things. My favorite is one of her recurring characters, Bubba the dog. I noticed a carefully crafted series of dress paintings and asked her if it was a new direction. she said, no, it was an additional, more personal series that she was developing over time. She talked about her inner conflict between her expressive, emotional work and her more detailed, "illustrative" work - it's hard for her to choose which way to go . . . I said "why choose?" - I thought she should just keep doing them both. 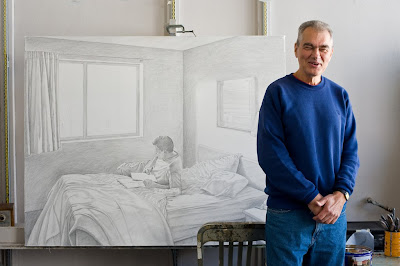 photo © Marianna Whang, 2009 All rights Reserved
Dale Erickson is really settling into a new surge of creativity. A recent trip to Italy seems to have given him a boost. He is producing an incredible number of awesome environmental portraits, some friends & family, some strangers. 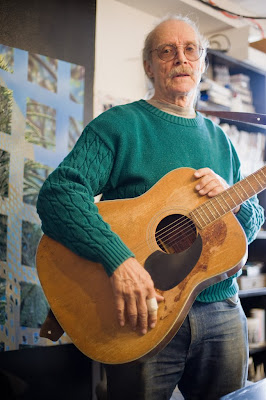 photo © Marianna Whang, 2009 All rights Reserved
Bernie Rauch in his studio. Yes, he was playing guitar, talking to us, AND watching a football game on TV.

One of his paintings is behind him - they are so incredibly complex, multi-layered, and multi-dimensional that it's been (so far at least) impossible to photograph accurately. You really have to see them in person. But Give a try HERE. 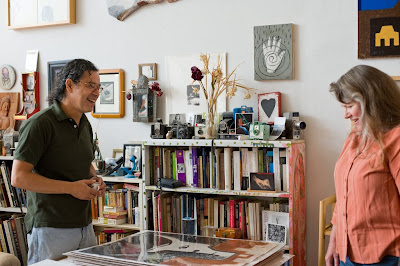 photo © Marianna Whang, 2009 All rights Reserved
Javier Manrique, talking to Anna Conti in his studio at Project Artaud. Javier is fluent in many aspects of art making, including painting, encaustics, fresco, printmaking, sculpture and installations. He also has a fabulous collection of old cameras (on the shelves behind him.) You should see his bronze castings of camera and other photo equipment!