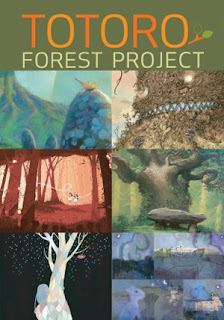 Now through February 8, 2009 the show “Totoro Forest Project” is on display at the Cartoon Art Museum in San Francisco. The show features paintings, drawings, digital art and sculpture from the Totoro Forest Project charity auction. The work, created by a large number of artists was inspired by Miyazaki’s film “My Neighbor Totoro” and auctioned on September 6th at the Pixar Studios. The auction sales support the Totoro No Furusato National Fund, a non-profit organization working to protect Japan’s Sayama Forest, an urban forest outside of Tokyo. It is said this forest was Miyazaki’s inspiration for the film “My Neighbor Totoro”. The organization that Miyazaki helped to set up is working to preserve the park and promote environmental issues.

I really enjoyed the variety of work in this show. Most of it was excellently crafted. From oil painting to soft sculpture I was inspired by the playful, magical, environmental and naturalistic theme. Some of the paintings were so traditional I wondered what they were doing in the exhibit - until I saw a small Totoro creature peeking out behind a tree. Others were excellent examples of illustration, both with traditional and digital materials.

If you haven’t seen the film: “My Neighbor Totoro” by master animation artist Hayao Miyazaki is one of my favorite movies of all time. The film is about a young Japanese girl and her sister who move to the country with their parents. They soon discover they are not alone in the quiet rural land and meet the forest spirit called Totoro that can only be seen by children. The film is filled with magical characters and forest scenes. Dakota Fanning does the voice in the English version. It is rated G.

Images borrowed from Cartoon Art Museum of San Francisco http://www.cartoonart.org/
and the Hayao Miyazaki website http://www.nausicaa.net/miyazaki/
Also, please visit http://www.totoroforestproject.org for a more information on the non-profit and a preview of images from the show.
Posted by Pamela Heyda at 8:53 PM