Leonardo and Mantegna at the Legion 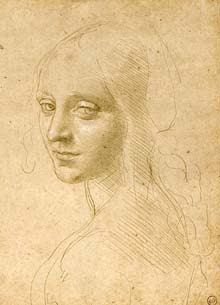 It's not often that we have two exhibits of this quality in the same place and at the same time.

Leonardo da Vinci’s drawings form the heart of the Renaissance master’s artistic legacy and continue to fascinate and challenge viewers today. A select group of eleven drawings, as well as one of his most celebrated notebooks, the Codex on the Flight of Birds, is on view at the Legion of Honor from November 15, 2008, to January 4, 2009. Previously exhibited at the Birmingham Museum of Art, Leonardo da Vinci: Drawings from the Biblioteca Reale in Turin, marks the first time that this remarkable group of drawings has been loaned to a U.S. exhibition by the Biblioteca Reale (Royal Library) in Turin, Italy. This small-scale traveling exhibition presents the first opportunity to view these drawings together, outside of Italy. (from the press release)

"The shadow of a great genius is a peculiar thing. Under Rembrandt's shadow, painters flourished to the extent that we can no longer distinguish their work from his own. But Leonardo's was a chilling shadow, too deep, too dark, too overpowering." (Sister Wendy Beckett).

The exhibit of drawings is small but exquisite and a reminder - if we needed reminding - why his work is still looked at today with equal parts of appreciation and reverence. To study his delicate but sure line line, his luminous faces, even the way the most casual sketch is positioned on the paper is worth a year of graduate work in the most prestigious art school. 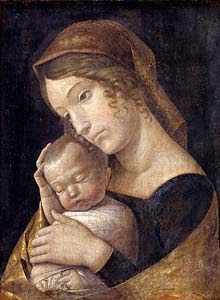 This other exhibition honors the cultural legacy of James Simon, perhaps the most important patron Berlin has ever known. Over 100 works, borrowed from nine separate museums, spanning from the 3rd millennium BC to the 18th century AD, grace the special exhibition galleries at the Legion of Honor from October 18, 2008, to January 18, 2009. Highlights include the Egyptian, New Kingdom bust Queen Tiy, a lion relief that once lined the Processional Way in ancient Babylon, Andrea Mantegna’s The Virgin with the Sleeping Child, and a 19th-century woodblock print by the great Ukiyo-e master Utagawa Kuniyoshi titled The Priest Nichiren in the Snow on Sado Island.