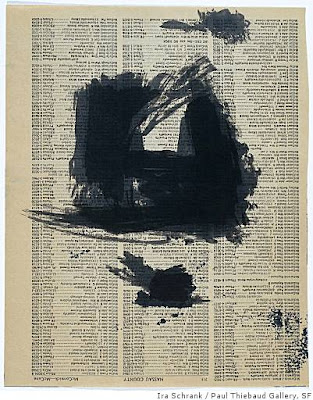 This small but marvelous exhibit shows the roots of Kline's larger black and white paintings. The father of black and white painting came from a background that was as grim as any in Dickens'. Orphaned as a boy, a poor student, crippled by a bout with rheumatic fever which caused his early death, he led a brutal, hardscrabble life for years. His breakthough came in 1950 with a show at the Egan Galley of the work for which we now know him for -the stark, dynamic and large scale dramatic paintings. These small spontaneous pieces on old phone books - given to Thiebaud as a gift - encapsulate in minature that raw force. Franz Kline once said, "If you meant it that much when you did it, it will mean that much."
Yes, it does still mean that much.

great work by Kline, thanks for posting.
greetings
http://www.jtwine.com