More from the Simon Collection at the Legion

This should be a "must see" for the holidays. The show compasses two millennia and three continents in a few small rooms. Each piece is not only exquisite but historically important. The show features about 150 works, ranging from ancient Mesopotamia to 19th century France. This is only a small selection the collection which is going to be housed in a new museum on Berlin's "Museum Island" later in the decade. The Priest Nichiren in the Snow on Sado Island, from the Life History of Nichiren Series, by Utagawa Kuniyoshi––the majority of James Simon’s Eastern art collection was lost at the end of World War II. Happily, the collection of Ukiyo-e was saved and remains in Berlin. This woodblock print, circa 1831, reveals Kuniyoshi’s brilliant sense of color and design and is one of a series of ten prints created in honor of activist priest Nichiren. 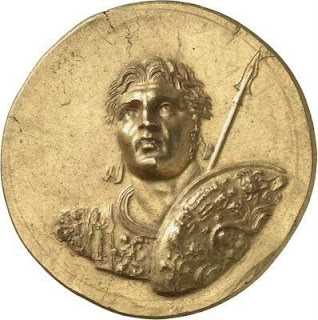 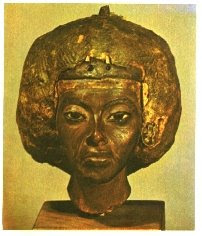 Queen Tiye, the mother of Akhnaton. The reproduction does not do justice to this piece. It's about the size of my thumb but carved with astonishingly realistic detail. Unlike other periods of Egyptian art, the Amarna period allowed artists to individualize their portraits beyond the canon and in this tiny but powerful piece, the Queen's forceful personality still speaks across the intervening centuries. The original bust of Nefertiti is too fragile to handle but the replica is beautifully done. The show has an even more haunting piece on display - an incomplete limestone bust from the workshop of one of the sculptors of the court. 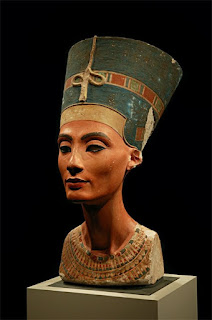 Eduard and James, who made their fortunes as cotton purveyors, gave one-third of their sizable annual income to charity, supporting both social causes and the museums of their city. In all, they gave about 20,000 objects to the State Museums of Berlin, among them important ancient artifacts from excavations that James supported in Egypt and Babylon.

James Simon also played a key role in developing Berlin’s museum landscape. He had a close relationship with Wilhelm von Bode, the museum director largely responsible for bringing the museums of the German capital to a position of worldwide eminence. To raise Berlin to the level where it could compete with museum centers like Paris and London, Bode systematically used a combination of public funding and the generosity of private patrons, many of whom were prominent Jewish art collectors.

In 1916, Simon approached Bode again and said he wanted to donate his entire collection. Simon’s second endowment, which he completed in 1920, was a rare event. In the tumultuous period following the war, few patrons were willing to part with as much of their art as he was. James Simon, who was a patriotic German as well as a Jew, died in 1932, a year before Adolf Hitler came to power. Simon belonged to Prussia’s Jewish community which was destroyed by the Nazis. In addition to its incalculable human cost, the Holocaust also obliterated knowledge of the key role Jews played in establishing Germany as a cultured nation.

All in all, he gave the Berlin Museum over 20,000 pieces and thankfully for us, most of it survived both the Nazi "purge" of anything they deemed Jewish and the violence of WW II.

Thanks to James Simon, the Berlin Egyptian museum has one of the world's richest collections of ancient Egyptian art from Tell el Amarna, and the Pergamon Museum in Berlin has a world-famous reconstruction of the Babylonian Ishtar Gate and its processional way. In addition to the model for the bust of Nefertiti, the Legion of Honor show includes clay brick fragments assembled into the form of lions that led the way to the Ishtar gate. It's hard to believe that this was the work of one individual. His generosity and insight into saving the art of the past have given all of us a priceless gift.

http://specialartgalleryexhibits.suite101.com/article.cfm/berlin_museums_legacy_of_james_simon_exhibit
Posted by Nancy Ewart at 10:54 AM