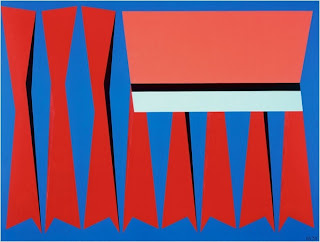 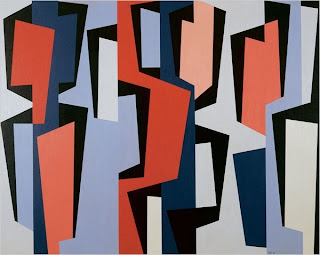 Two weeks ago I went to Oakland with several new friends found via the Internet including SF Mike (http://sfciviccenter.blogspot.com), his domestic partner, another friend and Matthew (http://lotsasplainin.blogspot.com/) to see the "Birth of the Cool" show at the Oakland Museum. The day was utterly delightful and Mike and Matthew's comments on the show enabled me to see the work with some new perspective. Matthew, like me, was a child of the 50's and the furniture, textiles and the Barbie doll (!) brought back memories of family rooms, plastic dishes and unfortunate accidents with the huge glass sliding doors that were so prevalent at the time. The show introduced me to a whole new group of painters. Birth of the Cool is a reference to a 1959 exhibition at the Los Angeles County Museum called Four Abstract Classicists, which featured the work of Lorser Feitelson, John McLauglin, Karl Benjamin, and Frederick Hammersley.The show presents a cross-section of art created in Southern California in the 1950, from hard-edge abstraction to architecture, furniture design, animation and jazz. It was an innocent, upbeat time and the work reflected that ethos. The lines are playful and clean, hedonistic yet not too self indulgent. The designers of the day were fascinated with the new materials of plastic and steel and totally oblivious - in architecture - to considerations of economy, energy and space. The huge glass windows and sleek furniture presents a vision of an America that was confident and open and could afford anything it wanted, even enormous cars with even larger tail fins and houses that leaked heat and would cost a fortune today to heat. America was on top and although McCarthyism laid a dark shadow over parts of the landscape, it doesn't seem to have touched these artists and designers or their rather Utopian vision of how American should, could live.

I had never heard of Karl Benjamin (or the other painters either) and found his work very intriguing. He painted overlapping and interlocking precise forms in startling combinations of rich colors that still look fresh. In a 2002 interview (NY Times), Benjamin explains that he stopped painting back in 1995. A bad back, a bad hip and “years of drinking too much,” he said, made handling the canvases difficult. “I started getting too creaky to haul these things around.”

"A self-taught artist, Mr. Benjamin began painting in 1950 while working as a grade school teacher. His principal started it all by asking him to add 47 minutes a week of art instruction to the curriculum."

“I bought some crayons and paper,” he said. “And the kids drew trucks, trees, mountains. That was boring, so I said, No trucks, no trees. And they said, What should we do? I said the right thing, even though I didn’t have any background in art. I said, Be quiet and concentrate.”

That exercise — ultimately a lesson in “finding the right color to put down next to another” — is not far from Mr. Benjamin’s own sense of composition. As he likes to say, “Color is the subject matter of painting.”

“As an abstract painter, you’re always flying in the face of your country’s values,” he said. “All of a sudden (Morris) Louis is selling a lot, but I’ve never made a lot of money. That’s not what it’s about. It’s about getting the colors right.” These words should have been written in huge letters over the exhibit and on the walls of every art school in the country. Be quiet, concentrate and get the colors right.

I loved this exhibit, I loved reading your writing about it, and I especially loved the excerpts from the Karl Benjamin interview.

Julie Karebenick, editor of the online project Geoform (www.geoform.net), has done a long and wide-ranging interview with Benjamin on her site. Check it out: http://www.geoform.net/features/features_benjamin-1.html

Joanne - thanks so much for the link. What a great essay; now that's the kind of painter I want to be when I grow up (minus the problems caused by a wee bit too much of the drink). I am currently working on an essay for my blog (Chez NamasteNancy) on geometric art which will reference you (with your permission) as well as Chris Ashley and Eva Lake.

It was great to read your thoughts.
It was an amazing assault on our color sensibility growing up with Karl as a father. The 60's in particular were intense...Here is a link to an upcoming show from that time. Should be fun and I hope to see you there! He is a great man and very pleasant to hang out with!
http://alumnicommunity.cgu.edu/s/221/index.aspx?sid=221&gid=1&pgid=444&cid=1015&ecid=1015&ciid=1174&crid=0