What really happened to the little mermaid. 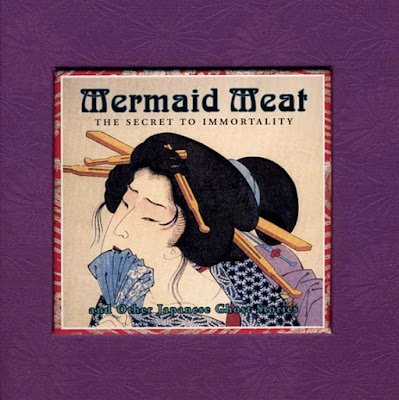 "Mermaid Meat, The Secret to Immortality and Other Japanese Ghost Stories"
A 70 page illustrated book and 1 hour cd of storytelling (with musical accompaniment)
by Brenda Wong Aoki and Mark Izu
ISBN 978-0-9797528-0-3

This little multi-media gem is an accessible and affordable work of art by two San Francisco contemporary artists and a Japanese woodblock master of Ukiyo-e. And maybe this silk-covered book-with-CD is also a transitional format for the book.

Brenda Wong Aoki describes herself as "a solo performer specializing in song/dance/monodramas." In this book, she presents four of her ghost stories - all female ghosts. These ghosts are filled with passion, rage, and the power to manifest their will. They cover the classic human themes of love, desire, betrayal, selfishness, delusion, cruelty, redemption, and the hunger for immortality.

The stories are presented in Aoki's written words and performed in her voice, accompanied by musician Mark Izu. For visual accompaniment , Aoki chose the woodcuts of Yoshitoshi Tsukioka, a talented and innovative artist from the 19th century whose work looks strangely contemporary. Aoki's stories also range back and forth through time. She writes in the forward, "It's the actions of the dead that bring us to the present. If you know the past, you can change your future."

I read the stories and looked at the pictures before listening to the CD nested in the back cover. I was impressed and moved. Then a few days later I clicked on the track for "Mermaid Meat" while eating breakfast . . . yowza - she reached out and grabbed my throat and that was the end of breakfast.

It's been postulated that books have outlived their usefulness, or at least their primacy in storytelling and may "end up back where they started, locked away in monasteries (or the depths of Google) read by a select few". Brenda Wong Aoki is a story-teller of the most ancient form, but in this project, she combines multiple technologies to pass her story along via the spoken word, the printed word, and the image. "Mermaid Meat, The Secret to Immortality and Other Japanese Ghost Stories" is of its time, with a message from/to all time.
Posted by Anna L. Conti at 6:53 AM

Another book on my must have list - thanks for the review. Have you ever seen the movie "Kaidan?" I think that the set designs were inspired by Yoshitoshi's work.