Thanks to the odd shape of the café displaying her work, I discovered the drawings and paintings of Sara Minardi. Café Trieste in the San Francisco Financial District was constructed from the leftover ground floor space of a newer condo building, giving the café the appearance of a series of converted store windows. Even Minardi's small painting hanging from the hallway wall—which is three feet from the glass front wall--can catch the eye of unsuspecting passers by. The big, sad, expressive eyes of Minardi's thin figured girl were eerily real, and the artist accurately captured natural slouching posture. 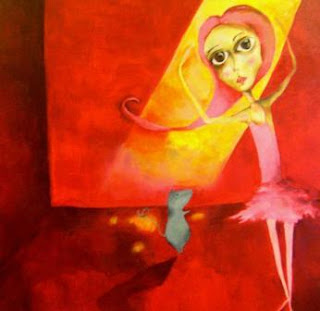 Minardi does not use models or poses. Most often, the beginnings of a figure drawing come to her as a gradual idea of a certain look. She starts her drawings with the eyes and head, with the head tilted down or down and away, or the eyes wide open looking right at you. Her works convey her appreciation for the effect of lighting and shadows on a slouching figure. A close examination of her paintings shows that beyond the realness of the figure, there can be added bones and extended and distorted limbs. Her painting, "Mother Earth," is both beautiful and disturbing, the head and face of the figure appear young and evolving, the body appears older and gaunt. 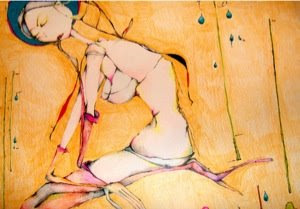 "The Saint" is angelic with a halo, and like many of Minardi’s drawings and paintings, was inspired by Aeon Flux cartoons, and the feel and look of paintings by Jean-Michel Basquiat and Anime popular in her youth.

Many of her early works incorporated buildings in the background. The red and blue buildings of “The City” reflect her native Syracuse, New York.

“The Whore” started out as a slouching figure on a bench, with a longer dress, and then became angry and upset. The scene is tense, like an Edvard Munch painting. Much of the figure was drawn by candlelight during a power failure; the blue skin was a surprise to Minardi when the power came back on. Minardi’s stuffed creatures and monsters are often “scary cheerful” mixed in with “cute and adorable,” like Aliens Meets Sanrio. As a child, she was encouraged by her parents to draw monsters that scared her, as a way to dissipate her fears. The inspiration for Minardi’s current creature creations is drawn from her life experiences, dreams, fairytales and stories from her childhood. 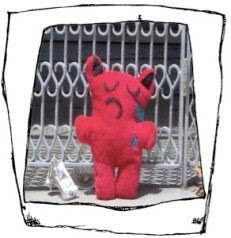 Minardi learned to sew as a young child, adding designs to her jeans as well as to purses she created. Her early stuffed creatures were all sewn by hand. Today she uses a sewing machine for the bodies, and a needle and thread for the faces and features. Like Minardi’s drawings and paintings, the three-dimensional creatures and monsters show mood and feeling, their individual character exposed by the artist’s purposely imperfect and asymmetrical designs.