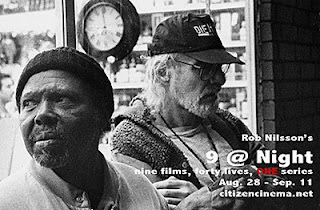 The premiere of the 9 @ Night Film Series kicks off at 6:30 tonight (August 28) with a Pre-Opening Benefit supporting Faithful Fools Street Ministry. The celebration will be at the Delancy Street Foundation, 600 Embarcadero.

Admission is free, and the program will feature tastings from Prager Winery & Port Works and Chocolatier Blue and a live auction with opportunities to bid on items such as a role in an upcoming Rob Nilsson film.

Rob Nilsson is a Cannes Camera d'Or and Sundance Grand Prize winner and Bay Area native. From 1992-2007, he worked with the Tenderloin yGroup, an actors' workshop recruited from the streets. Recovering homeless, drug users, and street people mingled with professional actors, inner city residents and all-comers. For many years, these workshops were held in the upstairs space at the Faithful Fools.

The result is 9 @ Night, a series of nine dramatic feature films chronicling the lives of 40-50 fictional characters living on the edges of society in San Francisco's Tenderloin. Each film stands alone but the 9 together weave a single 14-hour portrait of 21st century urban characters struggling to survive.

Sponsors, supporters and speakers include:

Please RSVP online at or call 474-0508 during business hours.