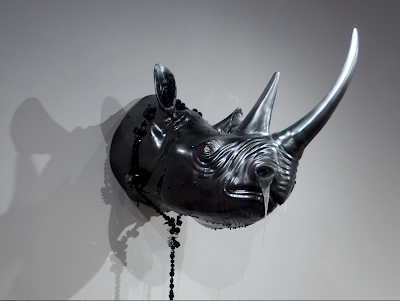 Bernie Madoff, Youre a Giant Prick

This is David Havel's second solo gallery exhibition at Marx and Zavattero. According to the review in the San Francisco Chronicle, the title refers to a line from a Laga Gaga song, a perfect framework for his satire on consumerism and celebrity worship. Placed in an irregular fashion in the gallery, most of the works are fun and funky and create that "funky botique vibe" that the artist wanted. One of them, at the far end of the gallery, looks like a hipster retablo homage to Miss Piggy with layers of pink, mirrors and gold leaf. But the piece-de-resistance is the huge black rhino head with snot dripping from its nostrils. Its three-dimensional presence is so visceral and brutal that it almost doesn’t seem to belong in the same show. There is nothing kitschy about this savage piece. It resonates with our knowledge of what Madoff did, along with many others in looting our financial system and the wanton destruction of so many people’s lives.


Friday Fish Wrap is up at the Examiner.com:
http://www.examiner.com/x-13996-SF-Museum-Examiner