Another city, another bridge - Joseph Stella at SF MOMA

A clever pun from the SF MOMA BLog: Reports are coming in that the Bay Bridge might stay closed due to a crack. Since this news is less than stellar we wanted to share something bridge related that is, shall we say, very STELLA. Come see the work in person by taking BART (Montgomery Station). 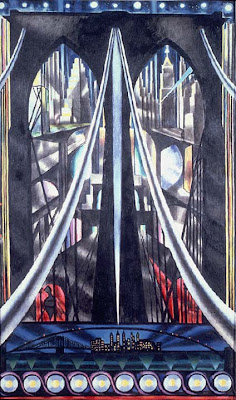 In 1896, Joseph (born Giuseppe) Stella emigrated to the U.S. to pursue a medical career. He soon changed course, however, and began illustrating immigrant life in New York's slums. These works were essentially of the nineteenth century in both style and social outlook.

Between 1909 and 1912, Stella traveled in Italy and France and discovered the formal and thematic innovations of the European avant-garde. His new work glorified the industrial prowess of the U.S. Foremost among his subjects was the Brooklyn Bridge, rendered as a constellation of lines dramatically receding in space. Many of his pictures derive their compositions from Renaissance altarpieces, but substitute modern architecture for sacred figures. This choice reflects Stella's typically modernist belief that in the future technology would replace the old religions.
Read more about Joseph Stella at the SF MOMA web site.
http://www.sfmoma.org/http://www.sfmoma.org/
Posted by Nancy Ewart at 9:47 AM