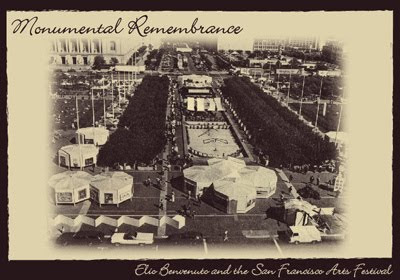 The Monumental Remembrance exhibit, at SOMArts Main Gallery through September 24, showcases recent and historic work by artists who participated in the San Francisco Arts Festival, which ran from 1946 to 1986.

Note: San Francisco International Airport also hosted a show, The Art of a City: The History of the San Francisco Arts Festival 1946-1986, which ended in April. I’ve enjoyed many art exhibits at SFO, and recommend using your miles just for the unique experience of seeing their shows. Anyone who has ever run out of steam plodding through an art museum can appreciate seeing art slowly pass by, with the wind in your hair, while riding the peoplemover conveyor.

Mill Valley artist Jim Chapin is one of those featured in the current SOMArts show, with an oil painting, "In the Key of Black," and a watercolor from 1973, "Acid Gears."

After struggling as a pre med major at UC Berkeley in the early 1960s, Chapin dropped out. The chemistry classes he took soon came in handy when he was hired as the manager of a soils lab. Then, six months after receiving a gift of painting supplies from his mother, Chapin found himself “lost in art.” 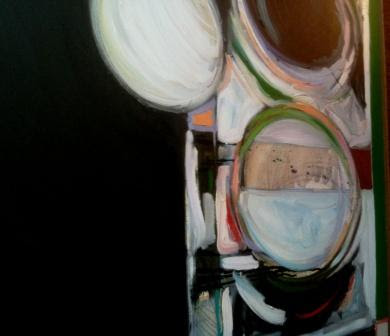 Returning to Berkeley, Chapin graduated with a degree in art. In addition to selling paintings out of galleries and his studio at 63 Bluxome, to support himself as an artist Chapin taught drawing classes and had a long stint as a limo driver for the St. Francis Hotel. He later “escaped” the Summer of Love drug culture in the City by moving to the Russian River, and eventually to Mill Valley. 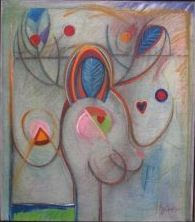 Chapin and his art had many encouraging friends in the late 1960s, including an editor of the San Francisco Oracle free newspaper. The Oracle displayed his work, “The World is Coming,” in their gallery and business office in Larkspur in the late 1960s before it was purchased by a collector. Chapin later bought the work back. It can be seen along with many of his other paintings, including those of his wife and muse, at the John Stayman Fine Arts virtual gallery at ArtPrice.com.
by Phil Gravitt