Shanghai at the Asian Art Museum 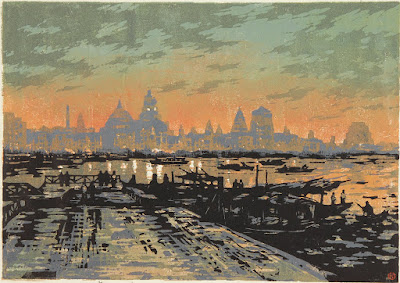 Saw the Shanghai show at the Asian Art Museum yesterday. It strikes me as an historical exhibit, using art to tell the history of Shanghai, one of the world's most cosmopolitan cities, and sister city with San Francisco since 1979.

Using paintings, prints, posters, furniture, clothing and installations, the show is arranged chronologically, covering the the period from 1850 to present. It's an abbreviated telling - the accompanying catalog is excellent however, and fleshes out many of the political and historical details between/behind the visual art.

"Shanghai Style" is on display here - an aesthetic sensibility that grew out of a place that had plenty of wealth, plenty of artists, a long history of cultural pluralism, and pride in local historical art motifs. The resulting innovation is a kind of torrone, with startling surprises like photorealist heads on the otherwise traditionally painted portrait scroll "Huang Jinrong and Du Yuesheng." (Click images to see larger version.)

A set of gorgeous woodblock prints (top image) from the 1950s reference Japanese woodblocks and European painting. And they have some spectacular examples of chromolithography made in the 1960s. 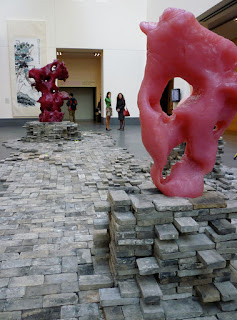 Contemporary Shanghai artists continue the fusion. Liu Dahong's "Mawangdui" is an embroidered banner based on one of his paintings. (Image at top left.) The stitching is done in such a way that the design is almost identical on both sides of the fabric. The images tell the story of a peasant girl as she moves through twentieth century political movements in China.

My favorite was an installation in the center court, by Zhang Jian Jun, called "Shanghai Garden." He used 3000 bricks from demolished 1920s era Shanghai apartments to line the floor and build bases for sculptures, which were cast from traditional Chinese garden rocks. But the sculptures are made of silicone. Tiny pots holding solar-powered animatronic plants dot the "garden."

Shanghai will be on view from February 12 through September 5.

Images courtesy of the Asian Art Museum, from top to bottom:

"Evening Glow on the Huangpu River" 1955. By Shen Roujian (1918­1998). Woodblock print with oil ­based inks and watercolors. Collection of the Shanghai Art Museum.