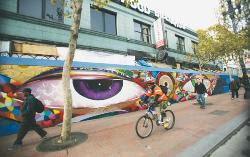 San Francisco street artist Chor Boogie was working on a project on Market Street between Sixth and Seventh street (in image at right) when he confronted four people who were trying to steal his spray paint. They stabbed him and took off on a Muni bus, but he hopes surveillance cameras will help police track them down. Boogie's mural is part of San Francisco's Art in Storefronts project launched last month. The arts commission selected 20 artists to come up with art installations aimed at revitalizing Market Street and other neighborhoods.

"Chor Boogie along with all the other artists who were invited to the Art In Storefronts program were only paid $500 to help defray some of their expenses associated with these installations, so they're really providing a gift to the city," says Luis Cancel from the San Francisco Arts Commission. Naturally the arts commission hopes this was an isolated incident but recommends that artists painting murals for the city work in teams. (via ABC News)