The Goddess in Ancient Afghanistan 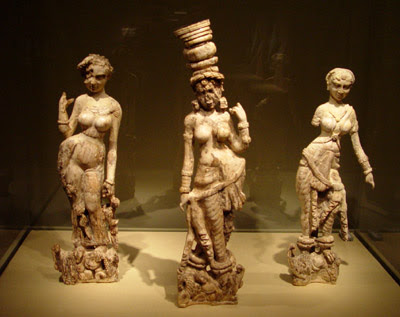 "Nowhere in antiquity have so many different objects from so many different cultures -- Chinese mirrors, Roman coins, daggers from Serbia -- been found together in situ," Viktor Ivanovich Sarianidi, the Russian archaeologist who made the historic find at Tillya Tepe in 1979, wrote in National Geographic in 1990. The inscription on the National Museum of Afghanistan states, "A nation stays alive when its culture stays alive."What is shown in the exhibit is the best of the Afghanistan past. I sincerely hope that they can build a future that honors this tradition. The outlook right now isn't too good and the art is probably safer now in the West than being returned to Kabul but I hope that time will bring an end to the conflict and the return of democracy to this war- torn country.

The Begram ivories are the smallscale equivalent of Gandharan sculpture, with curvaceous ‘goddesses’ in chiton. These ivories, believed to have come from a royal palace, along with the art of neighbouring Gandhara, are the link between Greek and Roman art and the Buddhist and Hindu art and shows how connected Afghanistan was to influences coming from both east and west. She is the kind of beauty that inspired poetry like this: 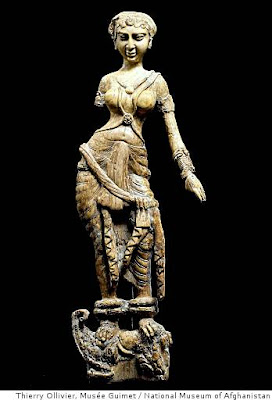 "O my idol! A cloud from Paradise
Has bestowed an emerald gown on the earth.
Deserts are like blood-stained silk
And the sky has the fragrrance of musk.
With a mixture of musk and red wine
An artist has drawn an image of my love on the desert.
The world has becom peaceful
For both the tiger and the deer.
For such occastions. we need a sun-faced idol,
And a moon. leaning on a cushion of sun.
We must have an idol with cheeks like rubies,
And red wine to match the cheeks.
The world has become a peacock,
With roughness here and smoothness here.
Mud smells of roses,
As though kneaded with rose water."

Just went to this show today, you beat me to the blog! ;-) The ivory miniature works have really made an impression on me along with the gold pieces from the tombs. Such artistry and beauty. The museum is free the first Sunday of the month, so for anyone reading this, if you are on a budget, go tomorrow November 2nd.

I am going again on Wednesday, courtesy of another friend who is a museum member. I read about this show when it was in Paris and have been eagerly awaiting it's arrival. The ivory goddesses are simply exquisite - in fact, it's hard to do justice to their beauty. I edited this post over and over because it kept getting too l ong. I am fascinated by Afghan history and the Silk Road but realized that our blog readers were probably not up for a post that ran to 20 pages.