"My Kid Could Paint That"

A few weeks ago the documentary film “My Kid Could Paint That” came out on video.

Here is the scenario: A 4 year old girl, Maria Olmstead, sees her father painting one day and wants to give it a try. Mark (the girl’s father) gives her a canvas and paint and she creates something abstract, beautiful and unexpected. Many paintings later the work winds up on the walls of a friend’s café. People are interested in buying, including a gallery owner. Less than a year later Maria has an art opening in New York City and is a major success. Maria becomes famous overnight and eventually her paintings sell for up to 15 thousand dollars. Without revealing too many details, the director Amir Bar-Lev, who has become a friend of the family in the process of filming, begins to question the possibility that Mark has some level of involvement with Maria’s paintings after watching a 60 Minute II segment on Maria. Bar-Lev sets his goals on filming Maria creating one of her paintings to prove her abilities. His presence is a distraction to her and this task becomes very difficult. In the end we are left to decide for ourselves whether or not these works have come from the hands and mind of a babe. 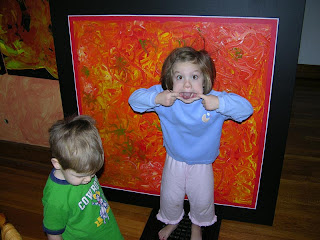 This was an interesting film! Maria’s paintings do have a maturity and beauty to them. It brings up many questions about the definition of art, beauty and the art market. What does it mean when a child sells paintings for 15k? Is that fair, is it right? If the dad had a part in painting them, are they still valuable? Is it cheating if the dad makes suggestions on what color to put where? As an painter myself, it makes me a little angry to think that people would pay 15k for a painting just because a 4 year old who has gotten media attention painted it. On the other hand, I teach art to 5-8 year olds and am sure I’ve seen a few Matisse, Dubuffet, Klein and Kandinsky look a-likes worthy of some monetary value. I don’t have the answers.

Personally I thought many of the paintings were very beautiful, better than a 4 year old could produce. The film reminded me of all the artists who are working so hard to be pure in their painting, to bring back the vision and directness they had as a child. There is a quote by Picasso that goes “It takes a lifetime to become a child”. Perhaps Maria will retain the enlightened wonder of youth. Only time will tell.

Both images were borrowed from:
http://www.sonyclassics.com/mykidcouldpaintthat/main.html
Posted by Pamela Heyda at 8:29 PM

Ooops! The girl's name is Marla, not Maria.