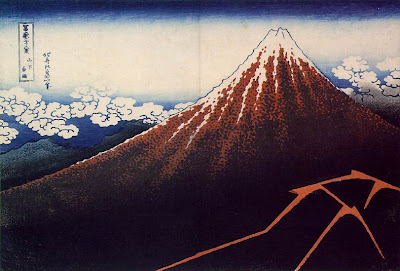 Thirty-six Views of Mount Fuji is an ukiyo-e series of large, color woodblock prints by the Japanese artist Katsushika Hokusai (1760–1849). The series depicts Mount Fuji in differing seasons and weather conditions from a variety of different places and distances. It actually consists of 46 prints created between 1826 and 1833. The first 36 were included in the original publication and, due to their popularity, ten more were added after the original publication. 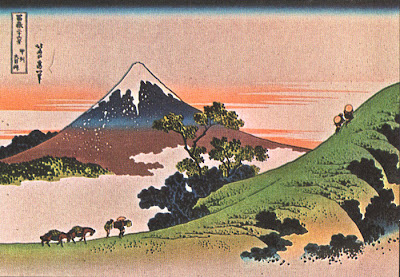 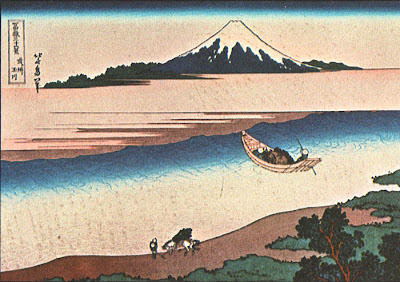 Mount Fuji is a popular subject for Japanese art due to its cultural and religious significance. This belief can be traced to The Tale of the Bamboo Cutter, where a goddess deposits the elixir of life on the peak. As Henry Smith explains, "Thus from an early time, Mt. Fuji was seen as the source of the secret of immortality, a tradition that was at the heart of Hokusai's own obsession with the mountain." 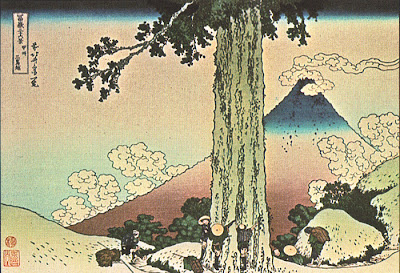 And this is what he wrote about himself in his autobiography. It is the quintessence of his art philosophy:

"From the age of five I have had a mania for sketching the forms of things. From about the age of fifty I produced a number of designs, yet of all I drew prior to the age of seventy there is truly nothing of great note. At the age of seventy-two I finally apprehended something of the true quality of birds, animals, insects, fish and of the vital nature of grasses and trees. Therefore, at eighty I shall have made some progress, at ninety I shall have penetrated even further the deeper meaning of things, at one hundred I shall have become truly marvelous, and at one hundred and ten, each dot, each line shall surely possess a life of its own. I only beg that gentlemen of sufficiently long life take care to note the truth of my words." 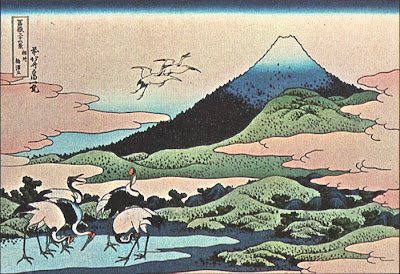 Constantly seeking to produce better work, he apparently exclaimed on his deathbed, "If only Heaven will give me just another ten years... Just another five more years, then I could become a real painter." He died on May 10, 1849 and was buried in Tokyo. (images from Wikipedia as the LACMA site only had one image up).