SFMOMA kicks off upcoming renovations with a 4-day party

Today, or Wednesday, May 28, 2013 at 11:02 a.m. to be exact, various San Francisco dignitaries were joined by the pupils of Bessie Carmichael School to officially kick off SFMOMA's upcoming two and-a-half years of renovations. They counted down, pushed the lever and flooded the temporary media space with glittering confetti. The glitter certainly reflects the upcoming 4-day long party, which began today with free admission until the museum closes on June 2. 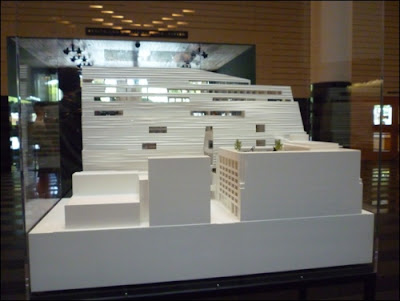 SFMOMA has planned something for everyone. Visitors will have the opportunity to party on the rooftop with cocktails and live music; stay up all night in the galleries and catch performances by 48 artists in a 24-hour variety show marathon. Or they can explore SFMOMA’s landmark photography exhibition Garry Winogrand and line up to catch Christian Marclay’s 24-hour video movie "The Clock."...more at:
http://www.examiner.com/list/sfmoma-kicks-off-its-two-years-of-renovations-with-a-4-day-long-party
Posted by Nancy Ewart at 8:46 PM