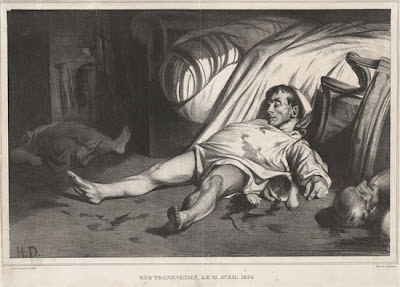 Long before Iranian cartoonist Mahmoud Shokraiyeh was sentenced to 25 lashings for drawing a parliament member in a soccer jersey, 19th-century caricaturist Honoré Daumier and his colleagues at the weekly Paris journal La Caricature endured prison sentences, fines, and litigation for their scathing portraits of king Louis-Philippe I of France, who came to power after the Revolution of 1830.

The Cantor Arts Center presents 50 of these pioneering satirical works in “When Artists Attack the King: Honoré Daumier and La Caricature, 1830–1835,” which opens August 1. The exhibition, drawn entirely from the collection of the Cantor Arts Center, also features issues of La Caricature and large Daumier lithographs published for L’Association Mensuelle, a monthly print subscription,

More at: http://www.examiner.com/article/the-cantor-center-presents-19th-century-political-caricatures-by-daumier
Posted by Nancy Ewart at 11:36 AM