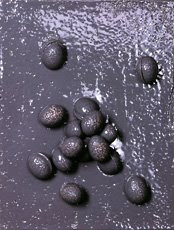 Since 1999, Swiss artist Mai-Thu Perret has been developing The Crystal Frontier, a fictional account of a group of women who found a small utopian community in the desert of southwestern New Mexico in an attempt to escape the impositions of capitalism. Employing part imagined and part annotated diary fragments, letters and texts from handbills, she sketches a kaleidoscopic image of a group of women who have retreated, disillusioned, from the city and from Western, i.e. capitalist, society. They pick up their lives again in the desert of New Mexico but on a different footing with work, nature and themselves. According to an essay written for the Renaissance Society, she sees feminism, as a distinct tradition of self-empowerment and a master narrative in its own right

In addition to this script in the form of texts fragments, Perret's nascent oeuvre comprises objects of various kinds that she describes as 'hypothetical products' of this women's commune. Included are a series of small ceramic objects, made in 2003, each one produced in the commune workshops.

"Perret's work is first and foremost anachronistic. Although The Crystal Frontier is set in the present, nothing could be more frozen in time than the idea of establishing a feminist commune. If anything, The Crystal Frontier is a trope for exhuming not just a recent past but any and all points along the historical continuum of feminism. In her alternate universe, however, feminism does not serve to complement Utopian thought. It is, rather, the other way around. Utopian thought is accountable to feminism. Functioning as a master narrative coextensive with Modernity, feminism becomes a binding agent for Utopian thought, be it grounded in fact or fantasy." And I say - huh?

What I find ironic is that, in order to understand even a fraction of what she is trying to say, you have to resort to theoretical essays, cloaked in the thickest art speak. What ever happened to discussing the elements and principles of design in a work of art? These are the fundamentals in which to evaluate the success or failure of a piece. I guess now the evaluation is based on the art object's market value, exhibition track record, previous owners, and to what degree the studio employees and assistants participated in its execution. In addition, if you are making political art, you don't let the image speak for your politics; you weave a huge, scholarly narrative around it and hope (trust) that the viewer will have the patience and desire to read it.

One can define visual art as making ideas visible through form. Art and object can be made to serve other additional functions, in this case political ones. But if you can't communicate primarily through form, it's not visual art. It's really text, and in this case, text that's put up on a wall in a museum because no publisher would be interested in turning it into a book. A further irony is that recently there was an extended discussion on Edward Winkleman's blog about the works of a Arab woman artist and the need to explain these works through copious wall text. Many who commented felt that if art needed such explanation, it was not fulfilling it's purpose. Without the text and some essays found via the Internet, Mai-Thu's work is completely obscure. It did not speak to me of feminism or even resonate with the sources that she is supposed to have used. The ceramic wall pieces "work" as art but certainly don't - for me -- justify the hype.

I keep thinking that I'm not much of a feminist if I don't "get it" with works like this. But I don't want to feel like an old foggie either who automatically rejects new art. But, frankly, I have no problem with the ceramic wall pieces. They are rather lovely. Where I got lost was how this fit with her elaborate fantasy of an Utopian Feminist community, where New Mexico comes in with spiritual Buddhist imagery and what the heck the two huge rectangular glass floor pieces were supposed to mean. Back in my day (yadda yadda yadda), feminist art was pretty obvious. Judy Chicago, Faith Ringold and other artists did marvelous art while also promoting a specific point of view. You didn't need to read a tome to understand them. These works were also shown outside the museum. I got the impression with Mai Thu Perret's work that it was made primarily for museums. But I also felt the same for all of the work in the "interactive art" exhibit on the 4th floor - and I'm working on a report on that one next. It's unusual that I find nothing to admire in work that aspires to say so much - but while the intent may be admirable, the execution leaves a lot to be desired. I went to the museum with two younger women from my class and they were even less impressed than I was.
But - as they say. Your mileage may varry. YMMV. 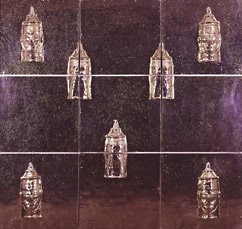 Essay at the Renaissance Society at the University of Chicago:
Interview: http://blog.sfmoma.org/
Posted by Nancy Ewart at 10:47 PM