Women Impressionists at the Legion 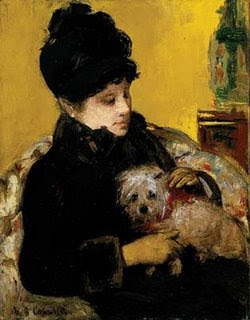 Thanks to a dear friend of mine, I got to see a preview of the upcoming exhibit of women impressionists at the Legion. It's comprehensive overview which is long overdue. I enjoy impressionist painting but it's been overexposed. Of course, that's also amusing, given how controversial these works were when first shown but by now, they've become ubiquitous. What I wish we could see in the art - and don't -- is the enormous struggles these women went through to learn their craft and be exhibited. Mary Cassatt is one of my favorite painters but I was disappointed that they didn't have more of her prints which did break new artistic ground when they were first produced. I prefer her clear eyed look at mothers and children to Morisot's sentimentality which is well represented in the show. What is apparent is how limited their viewpoints were, given the social strictures of upper class women. They painted women and children and members of their own families because they didn't have the freedom that men did - not only to attend classes but to simply come and go as they pleased, where ever they pleased, when ever they pleased. Cassatt was the only artist to attend school; the others had private lessons. She was also the only one who never married but she was still bound by family obligations.

Morisot came from very upper class French society and had to withstand savage maternal criticism to pursue her painting studies. Her sister wasn't as focused and settled for marriage; Morisot's biography shows her depression over losing her sister's company and her continual questioning of her own talent. She met Manet by chance and posed for several of his finest paintings. Unfortunately, while she's a fine painter, none of her fiery eyed personality, shown so vividly in Manet's portraits of her, comes across in her works.

Eva Gonzalez was just beginning to mature as an artist when she died in childbirth; she also studied with Manet and her style shows it. Bracquemond was saddled with that most common problem of women artists - an unsupportive and unsympathetic husband so it's a miracle that she produced anything at all. I was pleased to be able to view the exhibit before it's mobbed. It's a pleasant summer show and should educate those who still don't know about women artists. Unfortunately, as the current controversy over Dumas shows, women have continually prove themselves against harsh criticism and struggle with unfair disadvantage, generation after generation after generation.

See Eva Lake's blog: http://evalake.blogspot.com/ for a run down of the controversy over Dumas. Mark Harden's Artchive has articles and more images of the work of Cassatt and Morisott
Posted by Nancy Ewart at 4:22 PM